My daughter was hive free for one year

My daughter was hive free for one year, she has been off all meds and xolair since April. Unfortunately they are back and she is leaving for college 800 miles away in 3 weeks. I am so upset. She will be seeing her dr on Tuesday. I assume they will put her back on xoliar. Anyone else been off xolair and then put back on and have good results? Quickly? Lol

Sharon Kiser Gillespie
I was off Xolair for a year and then they returned with a vengeance!
Between 3rd and 4th Xolair shot from this go round… I have been hive free for five days! Everyone knock on wood!
I understand your worry Mom and hope it works quickly for her.

Rosavine A. Pablo
That scary 😭I am hive free ✌️ Im off from all of my meds including Xolair for 2 months.

Sarah Kraus
I was on Xolair for six months and then off of it for a year. I restarted Xolair and it took me until my fourth shot this time for it to start working. Hoping it works right away for your daughter.

Janet Chacurian Padgett
Yes – I was off it for 3 months and had to go back on and had some relief within a couple of days (with Allegra as well) and within a week was hive free. I hope your daughter has good results!

Tracey Kuhn
I was on Xolair for a year and a half. It was a miracle drug. Totally hive free and could eat or drink anything and had no need for antihistamines. Stopped it for four months to see if they were gone but they came back. Went back on Xolair again and hive free. Had to miss 3 months during a change of job and insurance. Went back on Xolair and nothing….. Didn’t work at all. I’m on month four of third round of Xolair shots and I think I might be seeing just a little progress….

Kirsty Moore
I was on for 6 months ( all they allow here before we have to have a break). Started second course on Tuesday, no results yet unfortunately, it worked amazingly first time round. Your daughter might respond really quick though. Good luck! Xx

Alex Arnold No I wish 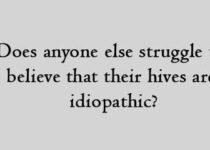