Wondering if anyone has the same hives issues as my boyfriend? Moved from Louisiana to Colorado in July, and soon after started getting hives. Too many new changes to determine what could be causing it. He has pretty bad joint back in his knees during a flare up, as well as back pain. Lab tests showed high CRP (in the 40s) but all other normal labs and then 2nd labs done a couple weeks later showed a normal CRP but a high c1q immune binding detect. We’re not quite sure what this lab means. The dr is thinking possibly an autoimmune issue, maybe RA since his mom has RA. But his rheumatoid factor was negative, as well as ANA was negative. Only steroids help, but not consistently. Doxepin seems to be working now but the hives still break through in the mornings. He also have Angioedema which them sometimes such as swelling under his eyes and upper lip. Any help? He has tried Allegra, Zyrtec, Zantac, Singular, Pepcid.. even got an epi shot at the ER which didn’t get rid of them completely. Also does anyone else’s seem to flare up worse at night?

Anmaria Djong We move to the newly built house and soon after my daughter get the chronic hives too. Every night without fail. .

Margaret Descant Anmaria Djong our apartment is newly built as well! We’ve been wondering if it’s that but we have a 1 year lease so we’re trying not to move.

Anmaria Djong Margaret Descant oh dear I suspect the chemical. We bough special air filter, etc. But it doesnt help. Now I am trying to do liver, parasites and heavy metal detox for her. We gave her celery apple juice every day. It helps to reduce severity of the hives.

Tammy Tj Perdue Rees A move is stressful and a lot of people start them because of stress.

Matthew Aaron Shepard Right before and even after I moved away for college I would get them at night bad and wake up without them. I believe it was partially stress related. Most recently (now) they have been happening in the day and staying pretty much until I get to bed.

Nadine Stalmeester I moved to the States in March and since then I started breaking out and it seems like it’s just getting worse. Nothing seems to help.

Beth Hinton Mine are also way worse at night. But I’ve never been able to find out why. They wake me up in the middle of the night. I’m currently taking Xyzal 24 hr every 12 hours. It keeps them mostly at bay.

Jan Hosbach I live in Colorado also, Denver area. I had a high autoimmune index in the 40s. I was worried it was from the emissions of all the fracking and drilling that goes on. But it may be my thyroid after all.

My thyroid was off with a high TSH level. Adjusted the dosage of the Levothyroxine and then the TSH went too low. Hives are almost gone once the dosage was tweaked again. 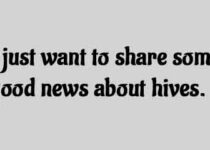