Can anyone explain to me why I regularly get a hive on the exact spot where I was bitten last year, and then developed cellulitis. Dr keeps telling me it’s not connected, but I can’t see how it’s not. I had 7 days of Intravenous tecoplanin for the cellulitis…. I’m currently experiencing a flare up which has started yet again on my heel.

Robyn Starks I get them on my surgical scars

Danielle Thrush Meadows Could it also be possible that “something” was left behind?
I only say this because I worked in veterinary medicine for nearly 20 years. I had a dear friend get bit by an elderly cat (he was in pain and had dementia to boot, poor guy) and they did all sorts of imaging, testing, etc and they couldn’t get her cellulitis to resolve. Finally a surgeon decided to investigate the original wound tract and found a tiny piece of dental tartar . Within 3 weeks of its removal she was nearly 90% better. It took them six months. I have since heard of two similar cases Something may be walled off (body’s self protection) enough where is isn’t a daily trigger, but maybe when things reach a certain threshold, it reacts Just a though. The human body is an amazing, yet terrifying thing.

Sarah Smith Very interesting and my thoughts entirely. The hives didn’t start till the July and I was bitten/cellulitis end March. It’s definitely connected somehow just hard to prove. Presuming it was a mosquito bite as was wearing jeans. Would any scans show infection etc being walled off

Danielle Thrush Meadows possibly.It is likely very very small, compared to a 0.2×0.2×0.1 cm piece of tartar.A biopsy/incision in that area is difficult to heal, but not impossible. Speaking from experience, I have Psoriatic arthritis and the last biologic I was on made me make dermatofibromas very easily. I had one removed .
A biopsy (usually a punch) could help get you answers, but getting them to do it could prove tricky.

Sonya Bales I get hives on my scars as well. 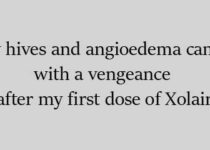