So Nov 2nd I ate canned tuna ( I’ve never ate canned tuna because I don’t like the smell (makes me throw up) but decided to try it because it was made so it wouldn’t have that smell?” So I ate it.
I ate a lot I would say about 10 dips.

Before nov 2nd let’s say from oct 20-nov 2nd I was drinking opened water bottles (opened bottles that I found in my room, some from my car and came and put them in the fridge)

So Back to Nov 2nd , I ate tuna at 3pm
And by 10pm I started throwing up, diarrhea, non stop until 2am. It was during time change so I woke up again at 2am~ and went to use the bathroom and it stopped after. (I also got in to a big argument with my partner to the feeling of betrayal)
After that the next day I developed HIVES???

Hives: under boob& above ,stomach , and some below my waist.  
What I did was ask my friend , and mom they recommended to put something cold, and benedryl
( hospital is not an option at the moment)
Fast forward every other night they keep reappearing
Some days they do not and other times they do

Could it be a virus? I feel fine.
They are itchy sometimes they’re not until I feel one burning

Vanessa Davis Kingrey Try Xyzal (it’s over the counter) if benadryl is not working for you. There are also many antihistamine combos that may work for you. I’ve been dealing with hives almost daily since 2000.

Ruby Vida Vanessa Davis Kingrey 😞 and it happens so randomly . I’m sorry you get them

Cassandra Braget Canned fish is high in histamines. I can’t eat it anymore.

Ruby Vida Cassandra Braget I was just reading about it. Does it take a few weeks to leave the body? 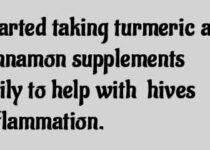