We have been dealing with these stupid hives for 5 years.

My daughter takes zyrtec and xyzal in the morning and hydroxizine in the evening. She used to take Zantac 2x a day amd we finally had everything under control but since zantac went off the market her hives are awful. They are like welts like someone beat her. So the dr just added an afternoon does of hydroxizine to see if that works. I am so frustrated. We have been dealing with these stupid hives for 5 years.

Annette Scarton Topolewski
Many post I’ve read the doctor has replaced the Zantac with Pepcid AC. I take one in the morning and 1 at night, along with the antihistamines and Singular.

Melissa Harmina Wilson
Annette Scarton Topolewski we tried that. It didn’t work at all. We also tried Singulair in the past but it didn’t work great and her behavior on it was AWFUL!

Diane Hancock
Annette Scarton Topolewski I use Cimetidine in place of Zantac and found it works better. I had morning nausea but didn’t know what was causing it. It has gone now I am off Zantac.

Yenni Emrick
Annette Scarton Topolewski
What is your regimen I recently got singular added to my cocktail
Trying to find a good schedule. Do you take your hydroxyzine an singular same time at night ?? Or space them out .I was also given Zyrtec an Pepcid for day time regimen

Annette Scarton Topolewski
Jennifer Emrick 2 Allegra in am 1 Pepcid in am. 2 Zyrtec in pm with 1 Pepcid and 1 singular

Yenni Emrick
Annette Scarton Topolewski for the pm all those you take at the same time or spread out at pm ??

Bethany Rossie
Hydroxozine has helped me ssooo much! I just wish I could take it in the morning too 😞 It knocks me out and puts me almost in a hypnotic state with very vivid dreams

Angela Little
What is lad therapy

Angela Little
Who does lda therapy what type of doctor

Eric Lagneaux
My doctor has me on Doxepin at night and Allegra in the morning. 1 and 1 unless it’s really bad then I can take 2 at night and 2 Allegra a few hours apart from each other. I have found rubbing ice on the hives brings some relief without meds.

Lauren Casey Yates
Taking two allegra a day has helped me SO much. ive had hives terribly for years and its the only thing that made them go away! 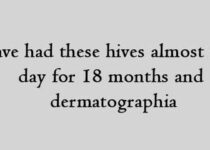