I’m on day 12 of these constant hives, I’ve never had them before and I feel like I’m mentally exhausted(not trying sound like a drama queen), all I’m getting from the drs is “just watch for what triggers you” and “it could take over a month for them to go away” do they normally not run tests?
Bloodwork? Anything? My skin feels like TV static and all these stupid antihistamines make me tired and crabby.. hives are stupid

Jillian MB I’ve been hearing this for 8 weeks now. Had my first ever hives outbreak end of June and I still have them. They won’t go away unless I am taking prednisone daily. I’ve also had a shot of Xolair that has not helped. I missed a dose of prednisone yesterday and by super time I was covered again, skin was on fire and I felt so itchy. I take two antihistamines a day also. I’ve changed my diet completely and nothing is helping. I have eliminated anything I can think of that is causing it. The doctors have no answers and no real solutions so I’m just stuck with them it seems 🙁 I’ve had blood work done for celiac and H pylori both negative. Other then that i just keep praying they go away!!!!

Sonia Ward Jillian, I did the prednisone and I don’t think it helped me, I have an appointment with the allergist but not till next month.. guess I’ll start praying, it just seems so bizzaro that I’ve never had an allergy or reaction to anything then all of a sudden I’m covered!

Jillian MB Sonia Ward Exact same with me. Literally one day I just started to break out and within a few days I was covered. i’ve never had an allergic reaction to anything else in my life. No allergies. The prednisone is horrible I hate it. It’s so hard on my body but it’s the only thing that helps somewhat. Once I start to wean off of it then hives come back full force. Like I said yesterday I missed one dose. Took it super time instead of the morning and I was covered by the time I got home!!!! After this round (once I am able to wean off again) I won’t be taking it again. It’s just masking the symptoms its not helping the hives or making them go away.

Sonia Ward Jillian, yes! That prednisone isn’t fun, makes me feel out of my mind. One of those deals where the medication side affects are almost worse then what its trying to help!

Barbara Hanna Take Benedryl or the Equate brand. Buy this lotion Take Zyrtec or the Equate brand every night. Apply ice packs wrap in thin towels to the worst places and move it around. Take only Tylenol or Acteminophen. NO pain meds with N-Saids such as Alleve,aspirin etc

Kristi Hall Spencer Listen to the Drs. They’re actually right. Research hives and you’ll see there often isn’t a solid cause found. My 11 year old had them worse than yours and standard bloodwork was done but didn’t show anything that would contribute to the hives. The Dr said it could’ve been just a virus and that most hives go away in 6 weeks. I was reluctant to believe him but he ended up being correct. After 6 loooong weeks they left.
I was told they wouldn’t even start looking for a cause until she had hives for over 3 weeks.

Helen Taylor-Bray I’m on 11 years of CIU xcolair has been a life saver, totally hive free as long as I get x

Patti Russell It took about 2 months for mine to go away. After allergy tests and a biopsy of one of the hives, we resorted to stopping one of my daily med’s. So far, no more hives!! I am diabetic, have hypothyroidism, depression and restless legs. I get cold sores on and off (herpes simplex) and that was the medication that I reacted to. Never had the hives before….. Between me and all of you…. I think Pharm Co’s are adding things into our medication(s). Some of our medications come from China!! WHOA!! Who knows what THEY put into our medications. Just sayin’. Hang in there… 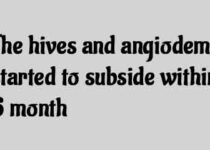