Any advice for during pregnancy? I am ten weeks and covered in hives and really struggling. I managed without medications before pregnancy because all the meds didn’t seem to help anyway. I was hoping they would go away but no such luck yet!

Lena Rodrigues Have you tried topicor? It got rid of mine.

Jessica Elizabeth What is that? I’ve never heard of it!

Lena Rodrigues Jessica Elizabeth it’s a spray to help hives go back to the hell they came from. Ask your DR. For a sample. Mine was for an allergic reaction, four months later she gave me Topicore and I haven’t had a break out again.

Tiffany Lee I’m so sorry, I don’t really have advice but I have been there and understand your frustration.
A pregnancy started my hives back in 2012 and I still have them.
Hopefully someone can come up with a solution to help you. I’m sorry you’re going through this. Hang in there.

Miranda Buscay Tiffany Lee, mine also started in the eighth week of my second pregnancy. 4 years later I still have them. I’ve never met anyone else who got them when pregnant, did you ever find a connection?

Tiffany Lee No other connection for in which it started besides pregnancy. Antihistamines don’t work for me and i found out by accident after carpal tunnel surgery that anti-inflammatories help take them down significantly. I treat with rx naproxen.

Usually NSAIDs make hives worse but I’m opposite.
They ended up just diagnosing as an unknown auto immune. Very vague.

Jacquelyn Brunache I also developed chronic hives in my pregnancy. They started around 7 months. I battled them almost daily. Luckily antihistamines work most of the time to keep them under control. Fascinated to find others who developed this during their pregnancy too.
To the OP. Antihistamines are safe. I was on claritin, benedryl and then switched to zyryec.

Miranda Buscay Thanks ladies, looks like we are all in the same boat with no answers. I’ve been on Xolair for the past 2 years and it’s literally given me my life back.

Tiffany Lee I had hives for years and no symptoms of parasites, I hadn’t traveled or been outside the US. I got them after being on the xolair. It hasn’t been easy fighting them either. Drs in the US are not trained properly and testing is unreliable here. 3rd world countries have much better care for them.
Although my situation sucks I would never discourage people from getting the shot. It can change someone’s life and suffering. I still recommend it.

Bethany Orozco Mine were worse during first and second trimester. Third got a lot better. I know Benadryl and Claritin are safe in pregnancy, say my doctors. I use those every so often as needed. Ice packs are my best friend. Not sure if it’s helped, but I went gluten and soy free, and at first I was on a low FODMAP low histamine diet – which is very restrictive. Now I’ve added a lot back in including vitamin D, fish oil and HistamineX probiotic by Seeking Health.

Amity Howell-Sloboda Oh man. I am so sorry. Both of my pregnancies were like this til after I gave birth. It was terrible. Try an anti-inflammatory, auto-immune diet. I wish I had. This diet has helped me recently and I know many others. 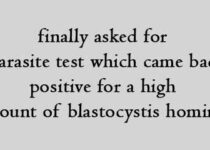