I have had some acid issues

Ok hive, I have a question for ranitidine/Zantac/H2 users? I added ranitidine to my cocktail a few months ago and it has helped with symptoms. However, I’ve had some acid issues over Christmas, the throat thing, sickness, nausea and gastric discomfort. Is this a thing? I’m thinking about coming off so interested in your experiences.

Meredith League Pretzie
Amanda Fowler you sound like me, I’ve had gut issues for a few years, think it’s the root of my hives.
Are you doing 2 ranitidine twice per day or 1 tablet twice per day?

Amanda Fowler
Meredith League Pretzie I take 150mg Zantac tablet in the morning and than another one 12 hours later. I take these with a 10mg Reactine tablet as well.

Amanda Fowler
I read recently about Keifer yogurt to heal your gut and I’m all for trying this but than I’ve also read and know dairy can destroy our guts and gut lining…..so confused.

Meredith League Pretzie
I’m off dairy at the moment, I think I’m just sensitive to it, and I know it can increase histamine production. That’s why they say no milk for kids when they have upper respiratory infections or colds.

Elise Rappoport
My acupuncturist is always trying to get me on kefir but I’m not great with dairy and the idea of it makes me feel a bit 🤢.

April Hubbard
My apologies, I meant that for Elise Rappoport

Amanda Fowler
April Hubbard thank you! I found a straw berry one and going to try it today. And have a glass of water to chase if need be 😆 😝

Elise Rappoport
Kista W Gagliano the gallbladder pain is unreal. I get this. Apple juice and apple cider vinegar fixes it in 10 mins.

Christy Gagleedo
Amanda Fowler mine was removed after the birth of my first child. Then I had bile duct impaction. God awful.

Elise Rappoport
Amanda Fowler never without industrial sized bottle of this stuff. I’d rather be in labour…no joke.

Ann Margaret Mole
Amanda Fowler Don’t try kefir l think it was that or an antibiotic l had around the same time that started my hives.

Alahora Belcher
Take 1 tsp apple cider vinegar mix w 1 tsp honey, add water and lemon or cinnamon to taste. This works for my heartburn. I’d hate for you to discontinue any regimen that is helping.

Elise Rappoport
I’ve done this a few times and I did wonder if this would help. I always have a huge tub of organic mother acv in the laundry room. Amazing stuff. Thx

Margaret Crider
I’ve been taking ranitidine for idk, 6 months or more. Either way, it has helped tremendously and I haven’t noticed any side effects. That said, everyone’s different and you having coeliac disease may alter your stomach acid and gut flora, causing a different reaction. Aside from the acid issue, does it help control your hives? If so, I would reach out to your doc and ask how you can possibly counter the issue. They may recommend taking it at a certain time of day or drinking water first or taking it with food. Hope you feel better soon! 😊

Elise Rappoport
It works this time round. Didn’t notice a difference on cimetidine a few year ago.

Kalyn Stagg
I stopped ranitidine in the summer and I still get this weird intense chest/throat pain 🙄 the sad part about taking it is if you take it when you don’t have gastric problems, it can cause gastric problems. So that’s fun. It also just didn’t really work for me in terms of hives so I kind of regret ever taking it 😭

Elise Rappoport
It didn’t help me when I went on it about 8 yrs ago but this time it has helped the hives. I just have a feeling that it’s now making me worse on the inside.

Seon Kim
Ranitidine is acid reducer. Not enough acid in stomach will cause discomfort. I stopped taking them. My GI tract was so messed up, took over 3 months to recover. Drink lemon water with meal. It helped me.

Elise Rappoport
I think the acid reduction is the problem. I have coeliac disease, had gastric ulcers and gerd as a kid, which did resolve when I was diagnosed and went GF at 19. So, I think my gut is the root of my problems and it’s super sensitive. Good tip about the lemon water. Thank you.

April Hubbard
I found out yesterday that I’m allergic to Zantac. Same symptoms, but my heart rate was crazy high and my throat was super sore. Thankfully no breathing issues.

Kristine Gagne
I’m allergic also, not just to that but also to anything made with iron oxide.

Abby Hanson
Could just be holiday food maybe? Be sure to let your Dr. know 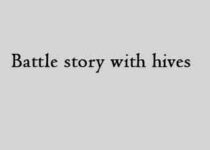