In the past few weeks I’ve been having a bad flare.
(after a few months of relief and almost remission on Xolair). I’ve been off prednisone since July. Xolair seemed to work. Until it didn’t anymore.

I had promised myself not to take prednisone again. Coming off it had been so hard, took so long, and the weight I gained on it is still with me. It was miserable.

So I tried. I really tried! I took a zillion antihistamines, creams, cold towels, meditated . To avoid the prednisone.
But after a few horrible days and the lady two unbearable nights, I broke down.
I took 20mg of prednisone.

Relief was palpable within an hour or two, and now, a few hours later, so much better. But I am beating myself up about it.
I know the road ahead!!! I’ve felt the terrible whiplash of withdrawal.

So, after having poured my heart out – question :
What is the quickest and least painful way to taper down from 20mg of prednisone?
3 days?
5 days?
1 week?
Must it be longer?
And it what doses?

Paula Rigley Drink celery juice. People get skin rashes from an overburdened liver which then sends out derma toxins to the skin.
2 packs of celery then juiced and drank every morning on an empty stomach. It will work.
Read up on Anthony Williams and celery juice.

Glenn Stewart Looks all too familiar to me as well as most of us. I don’t know what I’m doing right but I’ve been doing really good I’m down to 1/2 Xyzal every other day. Hope this outbreak is short for you.

Hayley Butler With the prednisone question, I was told to start tapering after I’ve been hive free for 3 days. Then decrease by 10mg at a time. For you, it would be to 10mg for 3 days so long as I am hive free. Then quit. I absolutely hate prednisone. I only take it when absolutely necessary.

Karen Hoffee Hewitt I feel for you. I’d call the pharmacy or a doctor and ask what a taper should be. Try the celery juice. Can’t hurt. Stay on the Xolair. I’ve had flare ups after sickness and/or antibiotics but it calmed down after about a week.

Aprile Woolcock Gosh feeling bad for u!!!
Hate prednisone too helps yea but leaves other issues like u mention. Drs say no longer than 5 days start lowering the dose after day 2. I totally agree with clearing the liver. Hope u get relief soon !! Hang in there. 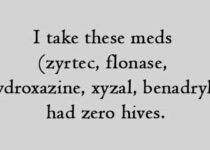