HEY GUYS I have had hives for about a month And I don’t know why it’s still here I’m freaking out because I never really had these before
I have been taking telfast 180! One in the morning and one at night, and there are still here. They disappear when I wake up and start somewhere new, I’m so freaked out to the point where i think my throat will swell!!! And I’m scared that will happen.
My dad has also had hives when his was younger for 4 years and also last year for about 2 months. I haven’t been to a doctor either should I go? Or should I go to the hospital sorry guy this is my first time having these on me for this long But they have never gotten really bad

Sarah J Beaton Keep taking the telfast and make an appointment with your doctor to write you up a referral to a dermatologist. I’ve had mine for nearly 3 months now and I know how worrying they can be!

Suzette Villa Yes omg! I’ve been so paranoid! And everyone told me stressing can make it worst but I don’t know how I can not be so stressed! But I am also a new mum as well which could also be the reason as I’ve been stressing!

Sarah J Beaton It definitely is frightening in the beginning as you have no idea what’s going on and what’s causing them. Stressing about it definitely doesn’t help the situation but I know it’s hard not to. The worst I’ve experienced is angiodema but thankfully mine just affected my lips and eye a little bit. Woke up with a swollen lip this morning but not panicking and just took an extra dose of Zyrtec.

Suzette Villa Yeah I have had a swollen lip 3 weeks ago that’s when I started taking tablets for it. I wasn’t taking anything when I got the hives as I thought it was just itchy bites then woke up one morning with swollen lip!

Rebecca Rose Derm is just going to say yup it’s hives. They did nothing for me. Need an allergist/immunologists.

Sarah J Beaton My dermatologist was fantastic! Still awaiting my allergist appointment though.

Laurie A Weber I think it depends on the dr. My immunologist was useless and my derm is the only one who understood CU

David Buhl They get worse at night. Take an antihistamine before bed for sure. Then see a doctor as they might want to do some test to make sure something else is not going on.

Christine Colardo I have them and still going strong – some days worse than others. I also suffer from stress and anxiety. I went to an allergy doctor for the first time today and he put me on a antihistamine regimen – Claritin in the morning Benadryl throughout the day And zyrtec at night – 300 mg of Zantac too – I will also start this Visaril which is For anxiety but also has an Antihistamine at night

Evelyn Brethour Which came first, chicken or the egg. When you have a hive flare up it is because chemicals were released from your mast cells. The larger the breakout the worse the chemical anxiety is. The thought of breaking out again, causes anxiety (LOL). I use to be so chemically burned when I first developed this issue. Medication, specially munosuppressants help tremendously. Welcome to the group. They are very helpful.

Melaney Reid See an allergist and have blood work and allergy tests done. Have them check for mycoplasma infection. I think that’s what’s causing it in my daughter 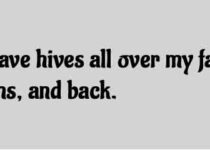