I’m hoping that my hives aren’t chronic but I have had proper itchy hives for 3 weeks now. Prior to this, I’ve had them (not itchy though) since mid November but they would go away once I took an antihistamine. That I could cope with, it’s the itch that drives me insane. I don’t know how everyone on here have been putting up with it for so long. Last week I woke up and thought I was having a stroke as one side of my lip was swollen and droopy, but no, it’s just part of the hives!! Which I guess is far better than having a stroke. My hives have gone from being mostly on my thighs and torso to my feet and hands as well as my back and breasts. I’m hoping that they don’t go to my face. It is summer (I’m in Australia) and I mostly wear long pants out know as my legs don’t look that great with hives all over them.
My doctor has me on fexo up to 3 times a day if necessary and Phernegan at night. The pharmacist suggested a b vitamin for stress and I’m also taking inner health plus for gut health. I find if I get hot (playing with the kids or mowing the lawn) I flare up.
I get frustrated when the drs tell you not to stress as it can be a factor, but how can you not stress when you are constantly itchy and are embarrassed about how you look??
Anyway, that’s my story, which I feel silly writing about as my 3 weeks doesn’t even compare with the stories I’ve been reading about on here and the suffering for years.

Christine Colardo Hi Sarah – your story seems exactly like mine – I started with a few here and there in October but then December it began to get worse – mine start at like 5/6 AM – they started mostly legs and butt but then moved just about everywhere – I too suffer from stress and my docs said that’s my main trigger – I too hoped I would not make the “chronic” mark of 6 weeks and here I am in week 7. I decided to go to allergist and he had me on A regimen that is helping but not making them gone.

Sarah Hedges The drs think I need to suffer for longer yet before they refer me to a dermatologist or allergist. It is so frustrating. I thought at first they were bites and something was attacking me through the night but I bombed my room, washed everything etc and decided that wasn’t it as also my son sleeps with me most nights and he wasn’t being bitten. I am about to start a diary to see if I can narrow down a bit more what triggers it. Am glad you are getting some relief with yours 😊

Christine Colardo Sarah Hedges omg me too!! I was thinking my new mattress, etc. but when I went out of town it still happened – I hoped and hoped I wouldn’t hit that 6 week mark but it had come and gone – wish I could say same thing about the hives

Sarah Hedges Christine Colardo I’m still hoping that I will just wake up one day and they will be gone.

Christine Colardo Sarah Hedges well I will say a prayer for you – I remember hoping the same, I wasn’t so lucky . I don’t know your situation but I’m also told that starting menopause could be reason – I’m not sure if I am officially starting

Sarah Hedges Christine Colardo I’m sorry to hear that. It’s strange that it is emotion that triggers them. It would be easier if it was just one thing and you knew to avoid it or suffer the consequences.

Prabash Sedara Hi, if you guys find it doesn’t go away within 6 weeks (i.e. it’s CIU/CSU), and the first line treatments (antihistamines/ montilukast) doesn’t help, I’d suggest seeing an immunologist (preferable at a public hospital- this may take a while) as they would be able to prescribe Xolair under PBS. It seemed to have helped a lot of people and it is very expensive without the PBS subsidy. I’m waiting to see my immunologist to potentially go under the treatment because nothing is helping (except prednisone which is bad for you in the long run). 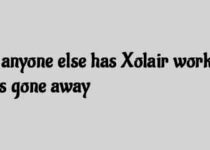