It’s been awhile since I’ve posted, or really checked in and I wanted to update the group with what has happened with me in the nearly five months since my first outbreak and diagnoses with autoimmune urticaria.
From the get-go I was treated with 60 mg prednisone daily, Montelukast and Hydroxyzine in the pm, Xyzal and Allegra am/pm, and received three shots of Xolair. Nothing seemed to be working and each time I went to the immunologist I kept hearing, “stick with it, be patient, you have an extreme case of hives.” I felt defeated. I cried a lot. I won’t use the word depressed, but desperate, hopeless, and rage come to mind when I think back over the past months. I ended up quitting my job not just because of the hives but it definitely factored into my decision and has largely prevented me from looking for work currently until a time came when the hives were controlled.

I quit one immunologist and found another. To no surprise he prescribed cyclosporine and recommended I get off all other meds. By this point I was only taking Xyzal, montelukast, and prednisone. I successfully got off prednisone with no side effects, stopped taking the montelukast and maintained my twice daily dose of Xyzal while waiting for my prescription of cyclo to be filled. In the interim I had added two new supplements to my regimen. For whatever reason, I was hesitant to take cyclo. It makes no sense as I had zero reservations about Xolair but I just felt reluctant and when I picked up the script I simply tucked it away under my bathroom counter.

It’s been three weeks since my visit with the immunologist and two weeks since stopping all meds with the exception of the Xyzal and adding the new supplements. It’s also the first time since this whole fiasco started that the hives have been under control. I’m not sure what to attribute it to, perhaps one of the meds I was taking was actually triggering me, perhaps something I started taking is helping to control them, or maybe it’s neither and they’re just naturally cycling towards remission. I don’t know but either way it’s the first time in months that I’ve felt human again.

The first picture I posted is intended to show you what normal me looks like, the rest are obviously examples of my flares and angio that I experienced over the past months. Several times my lips, eyes, and tongue had rapidly swollen to the point that it was a matter of deciding if we were going to the ER or not. I know you all know how much this condition sucks. For now, I’m grateful that I have relief, but I realize this may be temporary. I’m happy to answer any questions, but just know that I have no idea how or why my hives cleared.

Ryan Isenberg What supplements did you add? I’m recently in remission I believe. Down from 12 pills a day to a single zyrtec and I’m only taking it because my allergist asked me to stay on it longer. 100% hive free for a month and like you have no idea if it was naturally occurring or related to supplements I added about 6 weeks before things started to turn around.

Margaret Crider That is awesome news Ryan. I haven’t been hive free, just controlled but I’m okay with that. This is what I’m taking. It wasn’t until I added the probiotics and quercetin three weeks ago, the same time I stopped prednisone and montelukast that I really started seeing a change in my hives. I’ll finish out these bottles and might see how I do without them but if the hives start coming back I’ll add the supplements back in. What are you taking?

Pamela Vance Wollam At what point did you quit your job and how do you think that played into the hives lessening?

Ryan Isenberg I take 1 teaspoon of l-glutamine powder and 1 tablespoon of Apple cider vinegar before every meal. Mixed in a 1/2 glass of lemonade cause ACV doesn’t taste great😀. It didn’t change overnight. Actually 8-10 days before I saw any change. Then at the 8 week mark the hives became virtually non existent. Between weeks 8-12 I had a grand total of 4-5 hives and been hive free weeks 12-16+. All the while dropping montelukast, doxepine, Zantac, and 3 zyrtec from my daily meds.
This episode started at Christmas, so I had a good 5 months of escalating struggles with CIU. I was a week from starting Xolair when the dramatic change happened

Ryan Isenberg This is the l-glutamine I take off Amazon

Margaret Crider Pamela Vance Wollam I quit my job two months after everything started and it had zero impact on my hives, no better, no worse.

Margaret Crider Thanks for the info Ryan Isenberg. I looked into L-glutamine but couldn’t decide on one I liked on amazon and ended up not buying anything. I’m glad you seem to have had success with Now brand which I feel fairly confident in. As for the ACV, I read about that too and tried it but honestly wasn’t consistent with it. Again, perhaps I’ll give it another go especially if it means being hive free. When were you originally diagnosed with CIU?

Ryan Isenberg Margaret Crider it started 12/2016. Not my first time with CIU. 1st time was 1990 for 6 months, 2nd time was 2008 for 9 months. I knew what I had and treated OTC for 2-3 months before it went to a doc this time. It steadily got worse from December to May. Started supplements May 1 and saw steady improvement from about May 9 to July 10 at which point the improvement was dramatic. Last hive was a single one on my wrist on 8/16. Last before that was 2 on 7/26. No way to 100% know it was the supplements but I believe it was

Margaret Crider That’s so great! I really hope they’re gone for good and if not I hope next best case scenario is that you’ve found how to treat them w/out meds and knock them out.

Mary Dean Margaret Crider – Thank you SO much for posting. You give us all hope. Also would you tell me how long you were on 60 mg of prednisone, and was the dosage once a day in the morning or throughout the day?

Margaret Crider Mary Dean, I sort of jumped around on prednisone because it seemed to be the only thing that worked so my doctor’s had me start at 60 mg May 1st with the intention of titrating down 10 mg every week. The first month though, the angio got so bad that they kept having to kick me back up to higher doses. Also, the first time I tried to get off prednisone I was unsuccessful so they started me back at 40 mg and we titrated down again. And yes, I mostly took it once a day in the a.m. though there were some days that the flares were so bad that I needed to spread the dose out and would take it am/pm.

Mary Dean Thank you Margaret. This is helpful. I am taking 40 mg but still in misery from the rheumatologist. The allergist seemed to think a higher dose for longer so as to knock the hives back, and then titrate down. You did such a great job hanging in and figuring out what was best for you, and it is very kind of you to be supportive of others.

Margaret Crider You’re welcome Mary. This group was paramount to my sanity during some really bad days so anything I can do to help I’m happy to provide. I’ve spent the duration of this disease pouring over medical journals and searching peer reviewed articles for answers. I came to my doctors with a plethora of questions, it drove them mad, I didn’t care. I’m the one suffering, not them. The supplements I added were thoughtfully selected. I didn’t want to fall for snake oil or useless pills. I intend to try the L-glutamine that Ryan mentioned and also start back with the ACV before each meal. I justify it to myself by saying if it doesn’t hurt, and the cost is nominal, it’s worth trying a bottle to see if it helps. 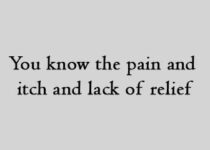 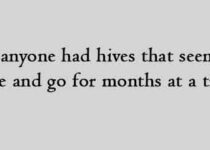