My body itself is itchy all over but but no rash, just am irritated itching.

I haven’t had a major hive breakout/angioedema in about 2yrs but I think I’m on the verge of something big and I’m getting nervous, which more stress sure isn’t helping. In the past 2yrs this curse has never completely left me. Any time my body gets the least bit stressed-my eye lids and the thin skin around my eyes will start swelling and I’ll get hives on there. In fact-I now have darkened skin around my eyes where the skin has been damaged by rubbing/scratching so much-permanent scars. I’ve dealt with it very frequently over the past 2 yrs but seemed like that was the only place that would ever swell and get hives. It would be so intense and miserable and then go away just as unannounced as it came. In between the eye issues I’d have random swellings in my ear lobes or the tips of my ears-same thing with the hives-is just start scratching and 1 ear would be covered in hives and swollen🤷🏽‍♀️. Then it would go away. But it was never the full body, covered in hives for months that I had before. Id take Benadryl/hydroxize and it would be gone. Well a week ago ran out of my Cymbalta that I take for fibromyalgia(Cymbalta is also a anxiety med that works with serotonin as a mood stabilizer). I wont be able to get to her dr until Aug 5th and Cymbalta is a very tough drug to stop taking cold turkey. The symptoms of withdrawal can be so severe they have a name-Cymbalta discontinuation syndrome and there’s places set up to treat people in withdrawal. Well I was having a very tough time of it, horrible migraine type headache, brain zaps etc, so my husband thought to give me something he takes that’s an herbal supplement-some 5-HTP. I took 2 capsules and within about 15 minutes I thought I was dying. I don’t know if it interacted with one of the prescription meds I’m already on or if it had something to do with me being in withdrawal-but I had a major reaction to it. It was horrible and unlike anything I’d ever felt before. My body forcefully began trying to purge everything in it, my entire body was burning like my skin was on the outside my limbs were like pins and needles-including my heart-I thought I was having a heart attack cause my heart was tingling. I was burning and sweating like crazy but to me I felt like I was freezing cold and was shaking/weak. I never ever felt that way. I don’t know how-but I survived and got a good lesson on not messing with herbal meds without talking to the dr!!! And I did ok yesterday but today I noticed my hands and feet -the palms of my hands abs soles of my feet starting to swell and get itchy. My body itself is itchy all over but but no rash, just am irritated itching. My neck too is irritated/itching so I know that all familiar feeling means I’m about to start breaking out in hives. I’m tired, I’m not prepared to fight this, this time. I can’t take months of this heat coming off my skin, of the never ending painful itching-of the swelling. U can’t walk on ur feel cause ur soles are swollen with hives, u can’t sit on ur butt cause ur buttocks have hives. I’m not in good health as it is already so this will be extra stress on my body. If I do end up with a full breakout/swelling I’m going to see if xolair works for me. It was offered right before what I thought was “remission”. I just hope it helps. Does anybody else have problems with hiving when their body is under sone sort of stress? And is it made worse the greater the stress ur body is in?
*Thank you for listening to me rant as well, I know this is a long post, but it’s been awhile and I guess I needed to just let it out lol

Jo Richardson
It sounds to me as if you have an allergy to something. Eye swelling like you describe is a classic sign

Sandy Kromer Eggert
I have to say that the symptoms you describe when you took the herbal supplement are the exact symptoms I had the first time I took Cymbalta. The response was so severe that I did not continue to take the medication.
I so hope what you are going through is just a brief interruption and that your remission returns ASAP. No matter what happens, you can do this. You have a whole group of people who know what this is like behind you. Be well Kristen Snyder.

Christine Cooper Rand
My hives are massively affected by stress. For the last 2 years I have had daily episodes where my whole body is covered in hives and with facial swelling and intense itching/burning. I’m on a cocktail of medication that simply easier my symptoms. My specialist says that it will burn itself out one day but can’t say when that will be – such a cruel illness. Hope you get some relief from your symptoms soon!

Kristen Snyder
I guess it’s been a little bit since I’ve posted my whole story but I had my first major flare at 19yrs old this was in 1992-nobody knew what was going on. It took 2months to get it under control. I wasn’t diagnosed until 2009. But I’ve dealt with “something” with this disease almost constantly since about 2014. If it isn’t a major flare it’s minor swellings and hives going on. It’s like as my body got older it was less able to control things, those years up until 2014 I would have a major flare every few years or so and that was it. Oh a mother weird thing….hives in/around the vaginal area and swelling. Omg that is awful but when I’m having the eyes, soles of my feet and palms of my hands swelling and itching-I’m having swelling and hives with my vagina too 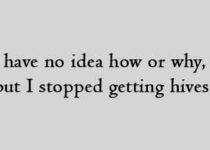