I never had a single hive in my life until after I had my son. About 2 months after giving birth I had a horrible 8 month long hive fest. It eventually went away and I was hive free and med free for about 4 years . It’s been back for about 3 months now and miserable. My allergist /immunologist believes mine is caused by my immune system rather than allergy. Anyone else have similiar stories ? I know I may never know why.. but I wish I could
My mom and sister both suffer from auto immune issues. My mom has MS, colitis , psoriasis, issues with her esophagus and more. My sister had her immune system attack her kidney.. I’m a bit worried
Also I may add , I took 5 days of prednisone during that 8 month horror fest and shortly after they completely went away …until this year.

Andrea Robinson
I never had hives until three years after my twins were born. I have also never been as sick prior to having children. They were premature, I had preeclampsia with ending up with fluid in my lungs and around my heart. They also believe mine is autoimmune. I ate a baked potato yesterday and have felt internally itchy and a tad more cranky because of that. I’d like to get my histamine levels checked.

Michelle Montgomery
Andrea Robinson so sorry to hear about all your troubles. I had my histamine checked and it is insanely high. My doctor says that points more to auto immune. He says over 50% of those with CU have high histamine levels.

Soren J Ateri
Yup my hives started 11 months post delivery of my daughter. Which also came with a severe hypersensitivity to polyurethane which landed severe reactions on top of the daily for no reason reactions. Allergist things mast cell triggered post birth and exposure from my memory foam bed landed the hypersensitivity trigger with it.
I’m 14w preggo with my next baby. On xoliar and meds which help but pregnancy has not caused remission

Michelle Montgomery
Soren J Ateri I feel so itchy all the time now even when hives are not there. Like hyper sensitive to sensations on my skin. It’s driving me insane. I’m sorry you didn’t go thru remission with pregnancy . This disease sucks.

Michelle Montgomery
I understand. My insurance won’t even cover it and I can’t afford it 🙁

Soren J Ateri
Michelle Montgomery in the usa the manufacturer will cover up to 10k a year of what your insurance doesn’t up to a 5 dollar copay.
Also all insurance companies deny it first try. You have to appeal it with your doctor it usually goes through the second attempt. Thays what we did. Aetna covered up to 200 a month then xolair covered that 200 a month to 5 bucks

Michelle Montgomery
Soren J Ateri thank you!!! Why does insurance deny it ???

Soren J Ateri
Bc it’s a specialty drug with no generic available therefore it auto denies and expects an appeal so that the doctor can illustrate why the med is needed. I additionally added a long note with pgotos of my flares and how this was ruling my life. My doctor showed all treatments done that failed and why this is optimal. Was accepted easily.
It’s common and always happens or at least to many. Appeal it and it will get through. The CO pay will be higher bc it’s a speciality drugs then go to xolair website and apply for the copay assistance and that tags on to it brining it to 5 dollars

Maria Sisk
me! never had a swell or hive until after my daughter was born

Michelle Montgomery
Maria Sisk it’s so weird !! I guess pregnancy and giving birth can flare up whatever we are predisposed to or whatever. My family has many many auto immune issues , so I guess this is mine.

Jenny Campise
8 months postpartum I had a 10 month flare which xolair helped to resolve. Immune related

Katie E. Burchiel
Never had a hive in my life until I was 39 and had a bad cold. About a month later all hell broke loose. Mine is also specifically auto immune based. My body produces a mast cell called igE on overdrive. The average person registers at less than 100 and mine at the time of diagnosis was sitting at 1365. Blexten has been my only relief up until now. That said, I’m fairly certain I am heading for (hopefully permanent) remission. I haven’t had to take a pill for 6 days and 5 days before I took my last pill (only took that one because I was going somewhere and was paranoid I’d blow up. Fingers crossed that I’m on the highway out of this nightmare. 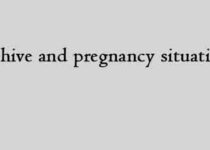