I normally get really small hives from head to toe, but this week I have this one recurring batch of hives/hive that doesn’t come with any of my triggers and has been in the same place every time 😰 it’s really raised (like more than any hives I normally get but doesn’t show too well in photos) and is a bit of a mystery. for size context it’s probably about 2×2 inches with a few other hives sprayed around it I’m at a bit of a loss as to what’s caused it

Rhoda Young I feel for you, it’s totally hellish

Sue Elshire Hargrave Your mast cells hold histamine, and histamine is being released from the mast cells. Chronic Urticaria is caused by that release from the mast cells. It’s due to the mechanism that controls of the release of histamine not working correctly. It isn’t caused from food or allergies. If you get hives from food, that goes under the allergy arena. If it’s gone on longer than 6 weeks, and nothing helps, you have chronic urticaria, and sometimes there isn’t a trigger. Sometimes, it is just that blasted mechanism that controls hive release in the mast cell being faulty.

Sue Elshire Hargrave this site can be translated- click on the British Flag to get it in English!

Becky Pearson I get mine from cold, heat and wet but I do also have normal chronic urticaria it’s just very rare for me to get anything like this
My hives are normally a few millimetres not 2 inches 😳 and they’re wide spread not topical . Wondering if it could be linked to medication changes but I’ve been keeping track with photos and hive diary so I will let my dermatologist know at our next appointment 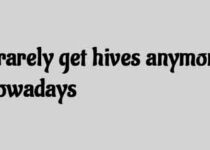