My hives are almost certainly tied to my TSH levels (as has been observed over ~60 blood tests) but of course that knowledge won’t keep my thyroid from fluctuating wildly as it tries to kill itself (Hashimoto’s). So this New Year’s Eve, I woke up with my legs covered in big wheals. I’m supposed to go to a party tonight, which I only committed to because I’ve been doing so well. I usually avoid social events because my hives tend to ruin the experience for me. I’m still going to try to go, but I’ll probably have to leave early and not stay the night, I can’t drink any alcohol, leaving early will probably mean I’ll get stopped at all the new year’s check stops, and I’ll be miserably uncomfortable the whole night anyway. Can’t I just get one damn day to be a normal college student?

Chuck Johannsen I have, and unfortunately it doesn’t work in my case and the side effects are awful. I feel very lucky to at least understand the source of my hives, and when my thyroid is within a (fairly narrow) euthyroid range, all is well. But my last blood test a few days ago revealed that it’s been creeping up again, which explains my last couple weeks of hives. I’ve adjusted my dose of thyroxine, but it’ll take a while to get me back into the safe zone.

Peggy Ann Green Chuck Johannsen My thyroid has been removed but I have hyperparathyroidism which the doctors are currently exploring as the possible cause of my hives.

Chuck Johannsen Peggy Ann Green Interesting… I’m not sure if that applies in my case as it seems to continually be correlated with variations in my TSH, but I know that there’s a relationship between TSH and PTH, so it would make sense that hypothyroidism could affect those levels as well. I don’t know much about the role of calcium – what do your doctors think that has to do with your hives? My doctor seems to think that TSH must be correlated with my TPO antibodies, but the two tend to move independently of one another, so I’m at a bit of a loss on my end.

Peggy Ann Green Chuck Johannsen parathyroidism causes high blood calcium which in turn raises the parathyroid hormone which can cause hives, dry skin, and many other symptoms

Chuck Johannsen Peggy Ann Green Oh, interesting! Thanks for the info. Wishing you the best of luck 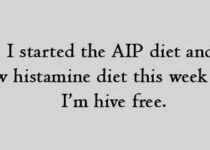