After eating crab and shrimp enchiladas the night before (which I have eaten MANY times with NO problem) my face got flushed and I got little bumps on my torso. A day or 2 later I developed hives and rash head-to-toe. This lasted about 3 weeks-ish. The purple marks lasted longer but have since gone.
I saw a dermatologist that did a biopsy but it didn’t provide any real answers. He sent me to an allergist that did the needle tests and blood test for crab and shrimp. I tested negative for crab and shrimp! Tested positive for a variety of tree, shrubs, cockroach, mites. The allergist said it could have been something called scombroid poisoning (https://en.wikipedia.org/wiki/Scombroid_food_poisoning). The only way to test for it is if you get tested the same day symptoms start. He also said it could have been a virus but no way to know for sure. My thyroid was normal.
I have eaten crab and shrimp again without a problem. I haven had ANY hives or rash since June.
I wanted to put this out there with the hope some of you searching for answers find it helpful.
It was 3+ weeks of pure hell but I am so grateful it hasn’t come back. My heart goes out to all of you still suffering.
Some things that helped during my flare up were oatmeal baths in cool water followed by witch hazel. I also would spray on Biofreeze. I was treated with 2 weeks of steroids, Zantac, Allegra, Zyrtec.

Christina Chandler Carter Could it have been something they were cooked or prepared in?

Lynn Lucas Gould So glad they’ve gone away and you’re doing better! What an ordeal you went through

AI AI Vaughn I use to eat clam chowder like nothing i ate it 1 day not to long ago n broke out in a full body hive, you can just BECOME allgeric to anything.

Elizabeth Mullins This may not be anything that applies to you but I read that seafood amines break down fast and should never eat if over two weeks fresh or two months frozen. Meats and seafood both break down even while frozen. So even if frozen properly, and the meat is not spoiled it will still build amines in storage.
Histamine is a by-product ( right word?) of Amines.
So my thought was this is a severe histamine reaction. Perhaps from the seafood being in storage too long since you did not react before or to testing.

Elizabeth Mullins I would add that there may have been other things going on in your body at the same time. This may have just been a “perfect storm.” that you body didn’t detox it properly. If it was the seafood

Melody Chou Maybe the shrimp or crab is not fresh?!
I was told to eat fresh seafood better.
Have u try Chloro tabs from Walmart? It’s works best for me. Take it before sleep, Its very drowsy.

Kym Cooksley What a shocker ! Glad you’re better that’s for sure. When it said positive for cockroaches etc…. wonder what and how this good is managed ! 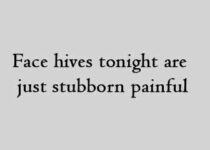