I have been living with CIU for over a year now, I have tried prednisone with no results and am now on a combination of actrivistrine , ranitidine, fexofenadine (all probably spelt wrong sorry!)
I have also started on methotrexate last week as a last resort, not impressed so far, I seem to have a lot of side effects and my skin has actually flared up worse than ever!
Any support or advice would be welcome, most of my life seems to be consumed by this problem at the moment, and it is very hard to find people who understand the pain and stress it puts you under.
I have attached a few pictures of my flare ups, my rash mainly appears in circular patterns (definitely not ringworm!) and covers me every inch of my body from top to toe! It typically lasts around a week leaving marks/bruises on my skin when it fades. I would say it is active on my skin about 80% of the time!

Ashley Rickey Mine look like that too where I always have to think, “am I sure this isn’t ringworm?” Haha!
But seriously, welcome to the group! This group is the biggest reason I’m still sane throughout all of this.

Kate Ross I am constantly thinking that, but I have been tested for it a few times and it’s always negative! It’s always in such a distinctive pattern though x

Maria Leonard Going on 15 months this time. Had them in 2011 -2012 for 15 months. I’m taking 60 mg a day of prednisone, a total of 18 prescription antihistamines a day, 2 xolair shots every 3 weeks and cyclosporine. The hives aren’t as intense as they had been but I have flareups constantly that get really bad. I’ve been to the ER with my throats swollen at least 6 times. When they get really bad, I take 4 benedryl every 4 hours. I’m tired! Exhausted! My words come out all wrong! The prednisone has made me mean! I have horrible headaches from the xolair and the week after the shots I’m so past exhausted I can barely lift my head off the pillow. I’ve gained 53 pounds from prednisone. I could go on but won’t. I pray every day that a cure is found and that people don’t have to go through this horrible ordeal!
I’m glad to finally find somewhere to talk to people who understand!
If I didn’t have my wonderful fiancé to care for me I would have given up a long time ago! He fights for me to get better

Kate Ross Hi, thanks for sharing. Prednisone was awful for me, the higher dose worked but made me so so poorly. I’m hoping the methotrexate starts to work soon, this is the second week of it now combined with all the antihistamines and so far no improvement. Only bonus is the methotrexate is helping me lose the weight prednisone out on 😂 I know exactly how you feel, my fiancé has been my rock through this over the past year I would be lost without him xx

Laurie Beall Toth I’m the same way right now. I cried this morning after only two hours of sleep it was a horrible night and I’m afraid tonight will be more of the same. My memory is going thanks to popping Benedryl like tic-tacs. It’s insane. I’m tired of it.

Liz O’Toner Hi Kate – when my daughter first got this rash 19 months ago, I though it was ringworm. So did the nurse. After all this time, and all of my frustration with the medications for CIU not working, we found out she had yeast overgrowth. She had been on a low histamine diet for a year, and then we added the candida diet. She started Itraconazole about three weeks ago, and this has given her the best relief. We’re at the point soon where we will wean off of it. If you look at the variety of pics people post, you’ll notice that there are a variety of rashes. Even the Chief of Allergy admitted her rash was not typical of hives, but she didn’t know what else it could be. It was her dermatologist that figured it out. PM me if you have questions. Here are pictures of her rash – similar to yours.

Kate Ross Hi Liz, thanks for the reply. That is very interesting. I have never seen someone with a rash with the same markings before. I had a quick google of yeast overgrowth and it looks like it is not taken seriously in the UK ☹️ I am guessing you are in the US? Seems there is a lot more help out there. I did have a drug similar to itraconazole when the rash first appeared but it didn’t help at all. Has the candida diet helped her at all? Thanks and sending thoughts to your daughter xx

Liz O’Toner Yep, we’re in the US – California. Yeast overgrowth is not taken seriously by doctors in the US either. A dermatologist we saw early on in this process (who initially didn’t think she could help) called our allergist and said she thinks we need to treat yeast mentioning that she’s seen this happen in a child many years ago. The allergist was pretty dismissive, but let us try some protocols for yeast. Her first two rounds of anti-fungal were with Fluconazole. We saw a little progress, but it didn’t do enough. But we’ve seen a huge difference with Itraconazole. Yeast can take a really long time to handle. The dermatologist explained why we have a histamine issue along side the yeast. She said that her body thought the yeast was an allergen and was trying to attack the yeast with histamines. (That’s my rough interpretation, since this stuff is way over my head.) We’re trying to expand and try new foods, but for right now she’s eating a vegan rice cereal with vanilla rice milk, lamb, rice, celery, cucumber, broccoli, cabbage, and a super low-sugar vegan (healthy) cookie. Doesn’t really taste like a cookie, but it’s a good filler. We tried chicken, but it’s still a little too much histamine for her. Subtle circles came back. We’ve avoided fruits because they turn into sugar in your body. Now that her rash has subsided, we’re trying new foods again. Be aware that if your rash is related to yeast, that red meat might be something to avoid during your treatment as it can create a breeding ground for yeast. I can share the article that discusses this with you if you want. BTW, another mom on the website had a child with a rash just like my daughter’s. She was treated with a couple rounds of anti-fungals and has been rash-free for several months now. Also, I’m attaching a picture of my daughter’s face when her rash was bad. You mentioned that your face can look like you were punched. My daughter too. It’s so terrible.

Hilary Lipscombe Welcome Kate 😊 mine start off full spots then go like yours as they start to fade and pop up somewhere else. I hope you find a treatment regime that works for you & they settle down soon, urticaria is an absolute pain in the bum

Kate Ross Thanks Hilary, I’m just tired of it now. It’s worst when it’s on my face, honestly looks like someone has punched me. It’s the constant questions from people that drive me mad, and the suggestions of what to do what they think it is 😩 xx

Hilary Lipscombe It’s draining, frustrating, embarrasing, drives you crackers at times and is really unfair! People (apart from this lovely site 😊) just don’t get it, even if they really try, until you’ve been in our skin it’s hard to appreciate 😖 hopefully you’ll find what works for you

Maria Leonard The first time I had hives, after 15 months they put me on methotrexate and the hives went away in 3 weeks. When they started this time they put me on methotrexate right away.
I don’t know about anyone else but when mine get really bad, I can’t think straight. I read the pamphlet and the bottle several times but I still took it wrong and almost died from it.
I was suppose to take 4 pills a week, I was taking 4 a day. I was so sick, I sat with a trash can beside my desk at work because I would get sick quickly and couldn’t make it out of my chair in time. I was so weak I would slide out of my chair. I kept telling my fiancé something was wrong I didn’t feel this way last time. I thought I was dying.
Luckily my Endochrinologist caught the error and I stopped methotrexate, it hadn’t helped the hives any at all and I had toxic amounts of chemo in my system. My liver and kidneys were showing damage. It was a scary thing to go through

Ana Garcia I have been on Plaquenil for a year and a half with success. This was during my third flare in 15 years. I tried the whole boatload of meds we all do here including 4 xolair shots which made me worse than ever, and searched for reasons for years. I accepted that most doctors will not find out why I get it. It was a relief to not spend hours on end searching. I wish you well and hope that you find something that helps you 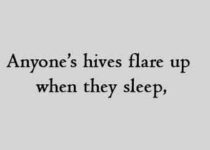