Got off prednisone successfully. Yay. Still on anti histamines. I take 1 zyrtec in the morning 1 in the evning and 1 benadryl at night. I started tapering off. First removed the benadryl at night then the second zyrtec. Then got rid of the last zyrtec. That night that i didnt take aby anti histamine, small red bumps started forming. One on back, one on shoulder, and thigh so I took a zyrtec and they went away. Next day tried to go without antihistamine again and itchy bumps formed on my chest and arms. Not too many so not too alarming. I’m grateful. I then took a zyrtec and a benadryl. I think i might go back to using all my antihistamines. With all that said. Does anyone have advice on getting off antihistamines?

Paul Chopra Duplicate your prednisone success… taper!! I’m on 40 ceterizine a day. I’d try taper by 25% every month. By late winter you should be good to go.

Barbie Isaac Paul Chopra got it ok. I two weeks om 10 mg 2 weeks on 5mg then 10 days on 2.5 mg during my taper. Started at 60mg. So for my antihistamine taper maybe remove one thing at a time and wait 2 weeks?

Barbie Isaac Yea i did this within days probably not a good idea. I got off the prednisone on saturday 12/21. Continued taking my antihistamines for a week then took a way benadryl after two days success took away night time zyrtec then a couple days success took away morning zyrtec. I know now to take it slow . Im gonna go back on my full anthistamine and then try again

Katt LynnAnn I only take an antihistimine if I break out bad n can’t tolerate it. I’ve noticed even if I don’t take any antihistimine the hives do disappear on the own for awhile anyways.

Barbie Isaac Katt LynnAnn thanks for sharing. There are so many decisions to make w this condition. I did want to see if they’d go away on their own but also that fear of a full blown flare up is sooo real. But yea eventually I’ll want to be able to have them go away on their own. I hope and prayyyy

Katt LynnAnn Barbie Isaac I see alot of people here way worse than me but when i first broke out with hives on Nov. 24th it was bad, I had 2 rectangular (the ends were rounded though, not straight) that were about 8-10 ” long and 3″ wide on each of my inner thighs along with several round bumps. I waited 6 days, thinking they would disappear, then went to the ER. Yesterday morning was my last prednisone pill. So far i’ve had very few breakouts since then. I almost took a antihistimine but decided to take a short nap. Woke up and no hives!! So, I’m still very confused as to why give us stuff that isn’t fixing the problem, only masking the symptoms. I read somewhere that if we keep taking and/or applying things to our bodies, trying to stop the madness, it can make it worse.

Katt LynnAnn Barbie Isaac I don’t know if i am going to need it again. It was my last pill from last script. I hope I don’t need it anymore.

Barbie Isaac Katt LynnAnn sending good vibes your way. Are you on any anti histamines? Mine started in the end of October. Ny last predbisone pill was dec 21. I had to have a verrrry slow taper.

Barbie Isaac Katt LynnAnn oh that’s right you already said that lol. Oops sorry. Thanks for sharing. What was your last dosage of prednisone? Mine was 2.5 mg started at 60mg.

Barbie Isaac Katt LynnAnn that’s good you didnt have to taper too low. So good to be off of it. Here’s to positive thoughts that we will never have to be on it agai 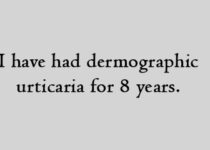