So after 3 days I’m still sore and my body looks horrible!! Swelling, sore joints.. And on top of it all I got my first period after 17 months!!! ( sorry too much info guys!)
Then go to doctor today to get something to help and as I’m no longer breastfeeding and I get Prednisolone? A steroid! Which after reading ingredients I can’t take as it has sunset yellow in it which causes my throa and tongue to swell!! I’ve been referred to a specialist, but can anyone suggest any meds I can suggest to my doc that don’t contain sunset yellow? Thanks!

Shontel Hollinworth Could you try a compounding chemist/pharmacy to make you the meds without the colours?

Joanne Benson That bruising looks sore ! Have u tried phenergan ? Amitriptyline? Citizen hydrochloride? Those where the only things to touch my hives

Pauline Mc Shane Doc thinks blood got into hives.. Never had it like this before.. The swelling and pain.. Thanks will look into these

Corinne Kramer mine looked like this this time. dr. thinks it’s urticaria vasculitis. did blood work to confirm. prednisone was the only drug to help me. mine had no colour in them.

Jennifer Gigi Neslen Please have them test your urine for HSP. That looks like the purpura rash on top of hives. Henoch-Schönlein purpura. I have urticaria vasculitis. The blood and bruising look different than this. HSP causes severe swelling. It can also damage your kidneys. It is worth doing a urine test. My son had it. It is very uncommon. It took a board of doctors two days staring at him until they realized what he had. Having a hive disease masks it. Here is an exaggerated case.

Jennifer Gigi Neslen It affects the lower extremities. It is treated with rest, elevation, and ibuprofen. It can relapse for up to six weeks. It is viral, and there is nothing else they can do for it. Obviously my son could not take the ibuprofen since he is allergic to NSAIDs. It is very important that you have followed up on, however. It can cause kidney failure. I am not a doctor. I am not a nurse. I am not trying to be an alarmist. Just being proactive. I hope you feel better soon

Pauline Mc Shane Gigi Neslen really?! Gosh thanks for the info! Will get up to doctor ASAP!

Jennifer Gigi Neslen Were you able to see your doctor to rule out HSP?

Pauline Mc Shane Gigi Neslen thanks for following up.. No couldn’t get in until next week.. Got steroids with no sunset yellow though x

Jennifer Gigi Neslen Pauline, then you must be feeling somewhat better! That’s great!

Pauline Mc Shane Yes.. Well I’ve had no hives the past few days Still marks on my skin but no itch! Enjoying it while it lasts x

Jennifer Gigi Neslen There is one thing that I’m realizing I was not clear on. They do not get a positive test result for HSP by testing your urine. They actually test the urine for elevated key tones which would show the kidney damage. That is what the actual urine test is for. They test at the beginning at the time of diagnosis and then they test again as a follow-up to make sure that there was no kidney damage. The doctor, who call me on a Sunday of all days, was very adamant that I remember to follow up for that testing in two or three weeks. He said the board had been meeting for two days and had just decided on his diagnosis. He had me return for a urine analysis. And then insisted that I do it again in a couple of weeks. We were OK for my son. I’m sure you will be too.

Evelyn Brethour You can get purer forms of the pill. Have your pharmacist look into it. I had too. You can always order from a compounding pharmacy. Have they been biopsied?

Nancy Mooney Michalak I agree this is not your normal hiving pattern. 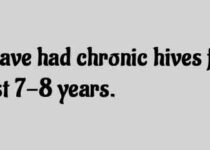