I am at wits end😔 my ten yr old son has been getting hives daily. I give him antihistamines every four to six hours and they do go away after about two and then BAM they are back. We have had two trips to urgent care, one hospital visit, twice to the pediatrician, seen a dermatologist and this past Wednesday saw an allergist. Every doctor has said it is hives ( no crap ) it is at it’s peek which I have heard twice three weeks apart.

The allergist did take 7 tubes of blood and told me we should get results back within two weeks. We have not changed anything, we are creatures of habit. I just want to get to the bottom of all this. He cries nightly because they itch so badly and hurt. We have tried everything from oatmeal baths, Benadryl, Zyrtec, Calamine lotion and Singular. This has been going on for a month now. Pictures are just when they first start, they cover his whole body including his face.
Anyways, sorry for the long post just really venting.

Rose Heck Beissel Try taking one Xyzal and one Zantac in morning and in evening. That worked for me

Tony Dunford Please have him start to drink celery juice daily. Lots of it. Throw it in the blender with an apple for taste. I use a combo of levoceterozine (Xyzal) and ranitidine daily for no breakouts

Jeni Lyman My 11 year old daughter started with these awful hives almost 5 months ago and I feel your frustration. We have done tons of testing but in the beginning when it started nothing showed up. Two months later blood work showed autoimmune urticaria. She has not one allergy they can find.
We now have started cyclosporine and Xolair and I think honestly Xolair has helped the most. We finally can go off steroids and Allegra and xyzal help keep them under control to where if she gets them they are minor.

Amanda Stine Jeni Lyman hi Jeni, similar situation. My daughter has had something going on for 3 months, conflicting dx of hives/not hives, do you happen to recall what blood test was done to derm termite autoimmune urticaria? So frustrated that we can’t even proceed with treatments because the allergists and seems we’ve seen say ‘not hives’ and refuse to run any tests!!!

Jessica Jones If they can’t find a cause it’s auto immune related. Look into the xolair shot. Your allergist would be the one to administer it. It has been a life saver.

Amanda Cabrera Go to an immunologist and have him tested for autoimmune diseases a d thyroid issues.
Did he recently have any changes to diet, soaps, clothing detergents, etc? Any recent vaccines?

Kelley Ortega Looks identical to my 8yr old son’s. He’s had this for about 2.5 yrs now, off and on. He’s had a bunch of blood tests done, no allergies, not thyroid related, not autoimmune as far as I know. So his diagnosis is simply “idiopathic chronic urticaria”. When it gets bad I give him Zyrtec. Excess sugar tends to trigger them at times. We’re in between flare ups right now 🙏🏼 Hang in there. 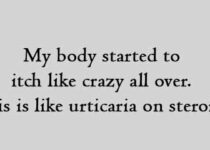