It’s been a rough few days!! Does anyone get purple coloring (like bruising around their hives)? My whole body Is broke out right now, but the colouring of my legs is concerning me. I have an appointment with an allergist/immunologist on Thursday. Seeing a naturopath next week as well.

Susan Belloni Yes, I have had that purply color but it goes away by evening.

Dawn Murray Me too, when they’re bad

Claire ReedDesimone Aw I feel for you. Mine started like that and ended up like pic below eventually diagnosed with huvs. By rheumatologist

Jessica Payne Jones A lot of times I will get that purple coloring even on days I don’t get hives.

Julia Hennessy Yes my daughter gets the same purple colouring – normally just on her legs. It is a concern and I’ve never really got a proper answer as to why this happens.

Andrea Hardy Hanner I have had two episodes now where my hives have lasted for 2-3 days and left bruises. I think it’s Urticarial Vasculitis. My immunologist wants me to have a biopsy if it happens again.

Paul Chopra Yes but I have a darker complexion so they don’t show up as much. Based on what I have learned the bruise if from about me is the broken blood vessels caused by the swelling, which is caused by the histamines being released by your mast cells.

Betsy Starrett DeVore Yes especially with a bad flare, on my legs. I get both bruising and a weird blue tint in between the hives. Hope you get some relief soon!

Stephanie Smith-Train Wow! I got the purpling color in my legs dating back to junior high. Before any of these health concerns reared their ugly heads. What in the world is it? I feel like it’s a circulation thing almost, but never found out what.

Kylie Druett Yep i get the discolouration. Even once the hives go the redness remains for a few days. I thought i was getting cellulitis

Joan Elizabeth Provo Clinkston I just want to throw in some hope. Please excuse my long-windedness. My symptoms were so much like what you all show here. After 6 months of suspending my life and dealing with them, I am now nearly hive free. I am only medicating with natural supplements and treatment for hashimotos disease which can be associated with Chronic Urticaria. I tried 8 different pharmaceuticals and none of them worked without their own set of side effects. I felt that the hives were worsened by them. Over the course of my treatment I saw two regular doctors, an allergist, an immunologist, two naturopaths, an endocrinologist, and a homeopathic healer who taught self healing. In the end it was the healer who had the biggest effect, encouraged me to meditate, calm my worried and frayed nerves, slowly wean off drugs and eat clean food. The immune system can be very responsive to the sympathetic – that’s why being in a deep state of calm CAN make hives slowly recede. When I was sick, caffeine, sugar and alcohol consistently caused the hives to return. Now I can indulge a bit. The deep red mottling on my skin lasted for a few weeks and very slowly receded. Please don’t believe that this has to last forever!!!! Apologies to those that have heard my repeated story

Lisa Nielsen Tacke I too have Hashimoto’s, and just started my path of clean eating. I pray and hope it works to be hive free

Stacey Jennings Glad u shared! I’ve been wondering about some of the things u said myself and have researched clean eating. I think our societies, the way most cultures live these days, our diets, and e erything we are and what we believe in how we choose to live our lives has alot to do with most illnesses and diseases. Food for thought! Thanks for sharing!

Paul Chopra Joan Elizabeth Provo Clinkston. That is so encouraging I applaud you for your hard work. You have motivated me to restart some of these paths. Thank you

Yvonne Visée Clohessy I get it on my thighs when I’m in the shower. The hotter the shower, the more blue my legs get. It disappears within 5/10 minutes after drying off. 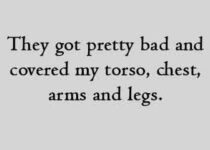