Hi Everyone,
I’ve been getting hives everyday for the past 2 months. My allergist has said several times that chronic hives usually run their course in about a year.. I’m seeing alot of personal stories here stating otherwise. Are there people in this group that only had consistent hives for about a year since first reaction?
Or maybe you know this was the case for someone else.Just trying to see if that timeline could be accurate.
Thank you!

Anne Oliphant Wahl I have had 3 cases of hive. when I was a little girl they lasted about 6 years . 2015 lasted a few months and I got the shot that stopped them. 2020 lasted about 4 months and have gone away now that I am gf and df.

HC Wilson It took 5 years for my hives to burn out the first time. Now its been 2 months.

Hannah Kyle Austin I’ve had one case of my hives, in 2018, and they lasted almost exactly a year. I’m now so scared of them coming back

Rose Heck Beissel Mine began back in 2002 and have been off and on since. Mostly off lately, but when they are on, they take a toll. Mine usually brought on by stress.

Cynthia Mullen I have had them every day for about a year now, started xolair in Dec 19 but it seems to have stopped working now:( my allergist said 50 percent of patients have them taper off in about 18 months, praying that will be me!

Millie Ber 8 years for me

Barbara Hanna I saw a dermatologist who gave me 2 prescriptions for pills and my allergist gave me a prescription for steroid cream. That with pills I already took for asthma and allergies such as Singular and Benedryl have kept them under control. Right away. The two months before the specialists were torture.

Chelsey De Leon I had severe hives for about 8mo then they stopped.

Alison Myers Was Jeffs I have had hives for the last 2.5 years. Xolair makes them disappear but they come back on my break. Never had hives before.

Sydney TC An allergist told me that at about 1 year, about 50% of chronic hives will resolve itself. And 50% of the remaining will have resolved at 2 years. And so on every year, that original number will keep halving.
Soooooooo basically I’m an anomaly having had them for over 10 years. 😅
I also think this group isn’t a good sample of all hives sufferers because one is WAY more likely to seek out a group when they have persisted for a really long time.

Melissa McDonagh I got my hives on the 10th January 2020.. every day was mental.. taking telfast 180mg in the morning, taking zyrtec at night, couple of times at hospital when it got really bad and blocking my airway. I started working out/diet eating a bit of protein and fresh salad. Nothing from a tin or pe made and for the past 3 days no hives whatsoever. I think hives came due to an allergy for something which none of the several blood test detected but wharever it was, with eating healthy and no pre made meals, i got my body back with no frekkin hives.

Charlene Herrmann My hives started in 2018. Lasted a year then went away for about 8 months. They came back about a week ago, but not as bad as in 2018.

Anne Outhouse Dixson Had mine for 2 yrs & 3 months. Not so bad in the winter. I live in Texas so winters are mild

Donette Hixchix Hicks 2005 and still dealing with them ! Gone through menopause.. had them as a child.

Alison Randall That’s what doctors told me too. I’ve had chronic hives for about 19 years. 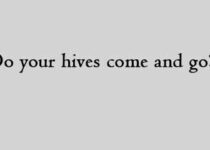 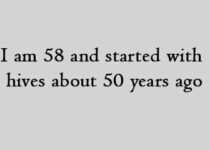