Anyone else start getting chronic hives postpartum or due to nsaids or due to scleroderma? Who did you see that helped you?

Any advice is welcome.. sorry for the super long post. I never had hives before but always had general allergies and take Zyrtec or xyzal everyday just to prevent itching. I have had allergy testing before and am allergic to dust, mold, grass, trees, dogs, and cats but have never had any reactions more than sneezing and itching. Anyway I randomly broke out in hives 5 weeks ago when I was 4 weeks postpartum. They started on one knee, then next day on both knees, then next day on elbow, then next day on both elbows, and then just kept popping up in new spots every day. The only thing that changed was that I took Meloxicam (nsaid) for maybe 2 days before the hives started. Before pregnancy I had been taking them everyday for 2 years for back pain but couldn’t take them while pregnant. I saw my OB who seemed to think I was crazy for suggesting they may be due to hormonal changes. Then I saw a dermatologist who said it was from the nsaids, even though I never had an issue with them before. I didn’t really believe it since I only took 2 pills and had had the hives for 2 weeks at that point. He prescribed me prednisone and said to take my antihistamine twice a day and take Benadryl but I couldn’t due to breastfeeding. Taking prednisone 4 pills a day cleared them right up but as I tapered down to 3 pills, they started coming back but weren’t itchy. Once I was completely done with steroids, they were all over my body and extremely itchy so the dermatologist put me on hydroxyzine twice a day, but it did nothing. I saw an allergist next and she sent me for labs and gave me more prednisone to get me thru a few days. I also got a steroid shot in my shoulder for another isssue that week. So being off the prednisone pills, I only had a couple hives and they weren’t itchy for about a week. I’ve been having bad headaches for a few days and was taking Advil,since Tylenol doesn’t work on me, and was still fine so I decided to try the meloxicam again last night and had so many hives pop up within minutes of taking it, so pretty sure I am allergic to it, but I think it’s just activating chronic hives due to either hormones postpartum or an autoimmune disorder. I was sent for autoimmune labs and my Ana titer is very high and c4c complement was low and centromere b antibody was highly positive so it seems like I may have scleroderma. I also have hypothyroidism for about 6 years now and have been on levothyroxine. I just don’t know what to do now. Every doctor says to see someone else.. the rheumatologist says to see allergy because the hives don’t look like autoimmune hives and the allergist says to see rheumatology because it’s autoimmune based on labs and the fact that antihistamines aren’t helping whatsoever. I’m just terrified that when this steroid shot wears off, I’m gonna be clawing my skin off again.
Anyone else start getting chronic hives postpartum or due to nsaids or due to scleroderma? Who did you see that helped you?

Jax Shepherd
For me, Hydroxizine every 4 hrs and 1 famotidine in the evening were no effect. Even when I doubled on dosage. In desparate act, I tried husband’s cetirizine, 2 dose and they calmed the hives some. I also do low histamine diet. Im also on 2nd dose of xolair and feeling some relief. I stopped baby aspirin when i startes low histamine dier 2 months ago. 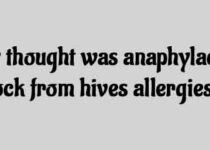