I hv been on these meds for 10yrs 2x Deptran (Doxepin) & 1 x Telfast 180 mg at night..after a week taking these my angiodema & hives dissapeared..I had the Urticaria for about 4mths prior & tried every other antihistamine available,but was told it had to be this one..The Deptran was used in the olden days to treat depression..They seem to think Urticaria is stress related & it may well be..it’s worked for me!! 😁 & has worked for others I know,that followed my lead.. Hopefully I can help You too!! Let me know how You go!!

Vickilynn Brunskill Thanks for sharing.

Chrissie Carver You are welcome,some medication may work for me & not others..because I hv been there & experienced it,I just cannot sit back & watch others suffer the same..it is cruel & to be honest it could drive anyone to suicide..No one knows what You go through & if You hv angiodema with it,it’s scarey especially the swelling of the throat..I look back at my pics,I looked like Prof Klump from The Nutty Professor with big lips!! wasn’t funny at the time tho & I really do feel for You all going through it.
Hope I hv shed some light!!

Vickilynn Brunskill I woke up with a horrible flare up. Just not fun.

Megan Hillarie Parks I notice my urticaria gets much worse when I’m stressed, whether it be emotional stress or stress on my body!

Chrissie Carver When I read about the Doxepin being used as an antidepressant I thought that it would help with the stress..but needed that extra antihistamine with it..

Catherine Isiminger Sandy Have been on Doxepin for a year along with Xolair and allegra and still have hives. 😦 Now on Cellecept, Doxepin and Allegra hoping this is the right combo for cholongeric hives

Chrissie Carver I tried other antihistamines but was told by the Dr it had to be the 180mg telfast..he was an old Dr obviously knew what he was talking about..but everybody is different..when You are desperate You will try anything for relief..

Catherine Isiminger Sandy I only take Doxepin at night. Do you do 50 twice a day? Maybe I need to up my dosage?

Chrissie Carver All at night!! the telfast gives You that extra antihistamine..

Moran Ben Dror Did you take it while planing get pregnant or during pregnancy?.. you or anyone else..?

Chrissie Carver Sorry,can’t help You there as I am past that stage..but talk to Your Dr

Moran Ben Dror Where is it cold?., I need to come I suffer from the hot weather its a nightmare

Moran Ben Dror Jodene Scott ooo I love NZ I wish I could move and live there !!! We did Honeymoon there.. the hives were better there.. took 1-2 telfast a day. And now 6 telfast, 4 lorastine, xolair, and still itch and full of hives all day long..

Moran Ben Dror My family doctor suggested the doxepin to me. 10 mg at first .. and I refused cause I read it is weight gain side affect, but now after too much suffering from the hives I am going to try that., well maybe it is better to gain weight and not suffer from the urticaria 24 hours 2 years.. i hope it will help me

Laurie Beall Toth Telfast is Allegra in U.S and I can’t take it anymore. I get terrible face twitches, eye droop(look like I’m having a stroke), numbness and burning in feet, insomnia, headache, etc. I have Doxepin but I’m afraid to try it..I’m just tired of nothing working or making it worse. Had a bad night and look like a freak again today, feeling hopeless as meds don’t seem to agree with me.

Catherine Isiminger Sandy Doxepin you to build up to when I started it last summer i can’t imagine being on 100 max I was on was 50. Currently on 25 helps with itchiness. I’m going to ask about people being on 100.Theres no way I could 100 being on Cellecept.

Chrissie Carver I was told to take it in combination with the telfast & it had to be the 180mg Telfast..I tried other brands beforehand & nothing worked It may work for some & not others..
I think because the doxepin(Deptran) was used as an antidepressant(yrs ago) it actually helps with stress..which they think is linked to CU..& with the two You get a big boost of antihistamine..My god,I was at wits end & would try anything,the itch drives You crazy..but both worked for me

Catherine Isiminger Sandy You take 100 mg of Doxepin at night.
The most I have taken is 50 mg. Tried to go off Doxepin since I’m now on Cellecept .the 2 together wipes me out.The itching was so horrible went back on Doxepin. 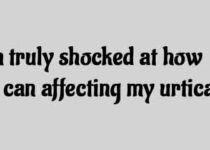