Hello I am new to the group. My daughter is 12 and has had hives for about 5 weeks now. She is using Benadryl and ranitidine mixed with Zyrtec and singular. We aren’t getting good results. The hives never back down. Can anyone help me here I’ve been at my wits end. Waiting on more blood work to come in with results. Did find out she was allergic to peanuts. The hives have continued without consuming peanuts. Any advice from fellow fighters of the awful thing would be so appreciated.

Debbie Weimer So sorry your daughter is suffering. I’ve had them for 2 1/2 years and nothing seems to help very well for me except xolair shots. I had been using them, then my insurance quit covering them, so I am sitting here suffering as well. Wish I could be more help. maybe someone else has some advice for you.

Melaney Reid The doctor mentioned having an injection I wonder if this is what she was referring to I will ask. Thank you very very much.

Sally Bligh Wow, I had exactly the same hives (chronic urticiaria) prior to being diagnosed with Lupus.

Melaney Reid The doctor ordered an immune work up of blood work do you think this will reveal any possible lupus? Thank you for your insight

Sally Bligh I dont know Melaney. I only know the hives where the starting signs of my lupus. I used anti histamines for relief. They eventually subsided I dont get them that often anymore. Im getting the famous joint pain these days that comes with lupus. I tested positive with a high ANA titre and dsDNA.

Melaney Reid Kara Hewitt thank you so much

Sally Bligh Thanks for sharing Kara. Prayers for Melaneys daughter

Liz King Hydroxyzine is my hero

Sasha Taylor-East Hi melaney, I’m new to the group too, and same as you my 7 year old is just over 5 weeks now. He had two days where he was symptom free! So we are hoping that he is settling now. He is on Desloratadine and singular. And had a 5 day course of pred about 2 weeks ago.

Melaney Reid Thank you!! It feels awful to say but nice to know I’m not alone. I’ve been an emotional wreck about this. My daughter has failed two 5 day rounds of prednisone unfortunately it’s been only temporary fixes. I have not tried Claritin so I will get that too and see if it helps.

Sasha Taylor-East I can sooo relate! Believe me, I thought I was going nuts. But really, it’s a matter of time, looking at triggers and patterns. Her immune system will settle eventually and in the meantime, it’s just frustrating and bothersome.

Sasha Taylor-East Also, with pred he was only clear for 3 days and it all came creeping back. Does she have angioedema too? That’s what we’ve found the most difficult because it is painful. Did she have a cold before all this started?

Melaney Reid I’m sorry I don’t know what angeodema is. Yes she has had a lingering cough for months prior to the hives. i googled that no she does not have that angiodema

Sasha Taylor-East The most common trigger in children is viral. And it can take weeks to months to go away. Hang in there! And try to continue life as usual . although I know it is easier said than done! And I can totally relate to the feeling of thinking that it’s getting better and then being bitterly disappointed

Jude Lemon My daughter’s has been triggered by viral infections (usually upper respiratory) but it was initially triggered by the flu nasal spray. We give a 5ml daily dose of citrizine which (touch wood) seems to keep on top of it. I also took a lot of the sugary food & sweets from her diet which may or may not have helped. It all seems to be a guessing game tbh

Jude Lemon My daughter’s has been triggered by viral infections (usually upper respiratory) but it was initially triggered by the flu nasal spray. We give a 5ml daily dose of citrizine which (touch wood) seems to keep on top of it. I also took a lot of the sugary food & sweets from her diet which may or may not have helped. It all seems to be a guessing game tbh

Mary-Anne Lomas Ask your doctor about Rupall! My daughter was on a similar regime as yours, until it stopped working. Now she’s on the Rupall and ranititidine and no more breakouts!! It’s been a Godsend

Melaney Reid I sure will thank you 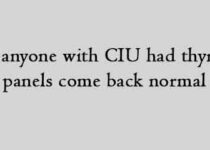