I was diagnosed with chronic urticaria in April ’16.
It started only on the tip of my fingers for few weeks. then, it spreads all over my face & body. I went to few doctors, was given antihistamines (cetirizine, fexofenadine, steroid etc) but I’ve seen hardly any improvements with those meds. I also tried cupping, but it was definitely not a good idea.
It get worst in June ’16. Elimination diet, I personally feel like its not been that effective for me.
October ’16, i start taking probiotics, drank apple cider vinegar daily and tried an organic product by Melilea. surprisingly it helps.
and Now, i am free from hives for almost 4 months.

Mislav Božić Do you drink it or apply it to your hives?

Kristal Sinfuego Drink 🙂 every morning 30mins before meal.. 1 to 2 teaspoon

Rebecca Hanover Kurzweil Anything else to know? Just put it on a teaspoon and drink it? thanks!

Kristal Sinfuego Yes and just ready with a warm water.

Theresa Kramer Gabica I drink 2 tablespoons in cold water in the evening. (My hives break out during the night.) I have also found it in pill form, convenient for traveling.

Kristal Sinfuego I think much better if you drink warm water but still it’s depends hehe. It’s helps to reduce weight too

Julie-Ann Hind What was the organic product? Are your hives autoimmune?

Alicia Deedee Yes. Im on natural organic supplements and not two weeks yet, I have reduced my antihistamines intake by more than half. Feeling much much better now

Judy Akhras How much apple cider vinegar do you take daily? Also what is the product by Meliea called? I’m almost willing to try anything.

Alterra Sanchez Yes I want to know too!

Katie Kouma Lockhart Would like to hear how you drank the ACV we tried it with my daughter it was too strong. We diluted it & put honey in it – still too strong. let us know thanks! & Good news for you!

Sarah Elizabeth Braggs ACV really helps! I’m not sure if ACV capsules would do the same?

Tosha Purran How much do you drink of the ACV? And do you mix with water?

Katie Kouma Lockhart Did you drink it straight or dilute it? How much did you drink daily?

Sarah Elizabeth I just took a sip right from the bottle haha. Maybe 1-2 tsp. I tried diluting it but easier to just drink it straight. BUT I wonder if over time if it will burn the esophagus

Katie Kouma Lockhart Thats what I have heard – that it can be hard on esophagus – also the enamel of your teeth. I have heard to brush teeth before AND after you drink – to get the acid off the enamel.

Jessica West I drink ACV too and see a lot of improvement. Water and honey is the best way to dilute it.

Julie-Ann Hind How much Jessica

Jessica West I drink 2 tablespoons twice a day. 30 min before breakfast and 30 minutes before dinner.

Jessica West No, they don’t seem to be. They came out of the blue almost 7 weeks ago. I had never had a hive before this. No food or environmental allergies. My immunologist believes it’s viral. My holistic doctor suspects leaky gut and candida. I also take a lot of supplements.

Julie-Ann Hind Thanks for the information. Stay healthy

Michelle Kellogg I am on probiotics and ACV too (as well as vitamin D and Turmeric). Start low and slow with the ACV, like 1 teaspoon in a glass of water first thing in the morning. Work your way up and add honey if need be ( I don’t use any as extra sugar, from any source, can make candida and leaky gut worse) . Use a good raw honey too so you can get the benefits from it as well.

Alterra Sanchez Are yours autoimmune?

Michelle Kellogg My Drs. haven’t given me any “title” after a year of this. I’ve seen three and two specialists, I’m the one who goes to them requesting tests. Mine seem to have been caused by leaky gut (which can be autoimmune) which was also caused by sibo and gluten intolerance. I was told by one specialist I was “pre-celiac”, so I may have caught it early enough to stop further damage, but can’t eat gluten anymore. He also said the only way I’d officially test positive for celiac’s is to eat wheat again for a month or so and get tested. I’m not putting myself through that hell.

Alterra Sanchez thanks for replying, I hope you get this worked out! 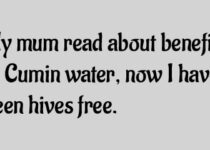