I get home from work and I made a marinade for tomorrow’s dinner. While making the marinade, I took a sip of red wine and a taste of some new balsamic vinegar and this happens. I’m going to talk to my allergist and make him test me for food allergies. He never tested me because he says I have no food or environmental allergies. This is a first for this kind of redness. It actually burns a bit. I think my Xolair is keeping it down. Maybe I’m just overreacting. I’m not sure. But it’s a strange red patch.

Leanne Amoore was it an immediate reaction?

Gene Starr I’m not sure if it was immediate. I got home and I don’t think it was there. I made the marinade and did the dishes and went to the bathroom and noticed it while I was in there.

Lyndsey Campbell Poor you,it will drive u crazy looking for answers,sometimes even showers bring me out,or even toothpaste,it’s whatever your body wants to do,I do drink and 9/10 times I’m ok but alcohol is said can be a trigger,and same as some foods,I’ve been told to avoid Chinese food,as this is also a trigger due to some of the ingredients that are used in there cooking,I hope your ok n try n keep cool n no scratching x

Deborah Lee That’s all it takes . I had a bite of mango and ended up in the er with a reaction . I’m. Allergic to latex . Take a antihistamine it will help prayers and thinking of you . It’s frustrating I know

Letrice Alexandria Walton If you can SMELL something you can actually end up having a reaction to it so even though you just had a bite you could’ve had a reaction just by breathing it in..it’s rare BUT then again so is this condition so it’s definitely possible. Oh and I get these marks alllll of the time they don’t itch but they do burn :/  it’s veryyyy uncomfortable I know

Alejandro Gonzalez I react to balsamic vinegar really bad. I also react to everything that is red.

Carla Gregory Maxwell I thought that I could drink alcohol again now that I’m having such good success with Xolair, but no. Tried twice, immediately began itching twice. I hope you took some Benadryl.

Missi Nelson Ouch! Hopefully this passed quickly. One of the things that helped me understand CU is we have a histamine intolerance. Some of us become allergic to shellfish but have no known food allergies prior to CU. So when/if they test you, you may not show an allergy. And due to this, my immunologist explained testing isn’t necessary but for IGE response to shellfish. I had to remove vinegar and things from my diet like olives-even naturally preserved- and all canned products as they also have preservatives that affect me. Nitrates in lunch meats, sulfites in wine, marinated meats, fruits like grapes, berries, mangos, and leftovers or meats not frozen immediately all have high histamine levels. You can Google low histamine foods and tailor it to your body’s response. I also eliminated gluten, soy, sugar, pork, corn and lactose from my diet. And when I cheated I paid for it with much worse hives. Staying on a clean diet and eating pears, apples, freshly cooked vegetables and meats helped the severity of the outbreaks, though, and off prednisone.

Faye Ridlehoover-Pepper Red wine is definitelly out for me. The last time I had it . . . whew!! Don’t even want . . . well, I DO want . . . a sip but just won’t do it. Have been staying away from things with high histamines as much as possible. I did take a chance last Sunday and ate some spinach. Success! But I eat real carefully the next few days to be safe. Read that apples help the DAO enzyme, so I eat one a day.

Sue Elshire Hargrave The only thing on the market at present is Xolair, and it’s not a cure, but people have gone into remission after using it for awhile!. Other than that, it’s just the other immuno-suppresants like cyclosporine, colchicine, etc., and they work very well for many people. It is a conundrum we know how it happens in our bodies, but not why it happens to our bodies. It is being heavily researched by at lease one pharma company, and maybe more – I am always on the lookout visiting their sites for info. The only things available for the itch are antihistamines. If you have an allergy, and it’s causing the long term acute urticaria, you may be able to find the trigger, such as milk, strawberries, sulfates, etc. It is such a difficult disease to navigate! 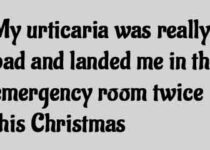