Its been 3 weeks since my 5th xolair shot hive free now for 7 weeks. This is the natural stuff i take (see picture) and i am eating what i want and even drinking wine occasionally! The only drug i am still taking daily is xyzal and levelthryoxine! There is hope for some! Praying for you all to find yours!!

Anne Pxyzxyz Good for you 😊. Are you going to come off the levocetirizine soon too?

Alexis Gilbert What side effects have you had from the xolair?

Julia Fontera Alexis Gilbert i had severe headaches several times after the 3rd and 4th shot and i had joint pain really bad after the 4th shot only. Thats it and levelthyroxin for my thyroid i will he on forever.

Alexis Gilbert I have thyroid problems too. Some times I wonder if I have the stupid thing removed if the hives would go away since I’m hyperactive with graves. Though supposedly my labs say I’m euthyroid right now. I’ve dealt with hives now for a total of 8 months since 2011. Had a remission from January/February 2012-September 2014. I’m just hoping that they don’t last now that there’s no thyroid “problem” to treat. I’m having a hard time with the there’s a relationship between ciu and thyroid autoimmunity but treating the problem organ doesn’t fix the hives.

Sue Elshire Hargrave Yay! I am soon glad it is working for you! It is awesome! 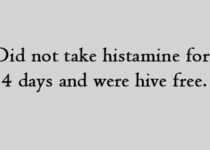 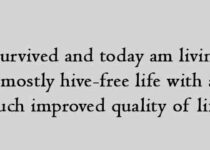