This is gonna be lengthy but I need some advice on this..

Hey guys!! This is gonna be lengthy but I need some advice on this…I’ve recently (recently being 4 months ago) stopped my Xolair injections cold turkey. I was having some insane side effects and I was miserable, plus on top of that I felt like my doctor cared more about symptom control than figuring out what’s causing my body to do this. This past week I’ve broken out for the first time since stopping. Usually I break out in hives on my hands to start off with then they’ll spread all over my body but these hives appeared only on my neck! I thought it was eczema at first but it’s definitely not. They’ve gotten worse over the past week and are now creeping up my face. I’ve gotten a 5 day prednisone pack, Hydroxyzine, and Pepcide to try to knock it out but no clear answers. This is not how I normally look during a flare up and these itch like nothing I’ve had before…could it be contact dermatitis instead of a flare? I can’t imagine what I’ve done different to cause it but y’all know how it goes. Also now I’m debating to endure the storm of side effects to avoid this….I don’t know which is worse at this point. Any long term users of Xolair in the group? What’s yalls experience? Any advice is appreciated!!

Mary Jo Metrick
Stella Bethlehem Narin a rash can be a form of hives, derm told me for more than a year it was a rash from dry skin, once biopsied it came back as urticaria dermatitis, then she said it was unlikely a medication…..I did an elimination diet for 3 months, I started having bone and joint pain….skip forward…..I was so itchy at Thanksgiving I decided to eat what I wanted but also right before that I eliminated one of my medications (an aromatase inhibitor that can cause bone and joint pain) anyway long story short 3 weeks or so later, bone and joint pain much improved but I am also rash free for first time in over a year

Devon Mogle
I’ve been on it for 3 years. Tried to stop hives came back. I don’t have side effects I just hate having to take them.

Renee Cobb
I’m the same as
Devon Weiler. 3 years, side effects are manageable but I’d love to stop taking it

Anne Camille Jongleux
I’m sorry that you have this after a few months clear. You should have a doctor look at it to diagnose. I think sudden onset 4 months later likely isn’t due to the Xolair but could be hives coming back because you stopped, or it could be a form of dermatitis. My hives often look just like a dermatitis rash or eczema, but both have been ruled out. Seems like the option for any of those dx is always to do antihistamines. If you feel like your allergist/derm will want to put you back on Xolair regardless, you have 2 choices: find another doctor if you have that option or tell the doc you do NOT want Xolair at this time and want to try other options before revisiting Xolair. Steroids have lots Side effects and hydroxyzine does too. Have you tried other antihistamines, like Allegra or Zyrtec, to see if that helps w less side effects? Also, your favorite topical to kill the itch might be useful. Good luck!

Gina Mastrotucci-Norman
Did you have any ASA or NSAIDs recently? Do you keep a food or products diary? Using that might help you to determine a root cause. I say products because some of them have priority allergens. There was a story in the news about milk being an inactive ingredient in a toothpaste. Or even face or body products.

Brianna LeFoy
Gina Mastrotucci-Norman I haven’t looking into this before but I’m interested to know more! Thank you

Janice Allred
A lot of the time there is no found cause for hives. A lot of us have spent countless hours, time and money to be told it’s idiopathic. Sorry for your situation.

Soren J Ateri
Side effects of xolair went away for me over time and I remain flare free. Unfortunately, alot of the time there is no exact root cause so searching for those answers can be a dead end. 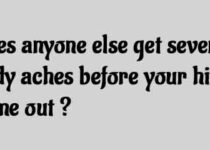