Here are a few questions from a “newbie” to this condition

How old were you when you had first outbreak and what were you doing? I am 48 and woke up with them….

Alison Jayne Clark I was 35 and 5 months pregnant. And it has never left

Crystal Alexander Had it for two years. Just popped up randomly. Xolair has controlled mine for a year but we just stopped it last month to see if I’m remission. So far so good but hasn’t really been long enough to tell.

Tania Hughes I was 34 – am 50 in April – mine also has never left . Am on Xolair which masks it well. I have resided myself that it will never go

Sheena J. Westland The very first bout was one day while pregnant with my son 9 yrs ago, then never again until May 17, and non stop till about 2 wks ago. Now im only getting 1 or 2 a day for some reason. Only thing i changed was taking vitamin d. I did have them all the time.
My go to was benadryl and calmine lotion. Still taking Rupall 10mg and cetirizine 20mg a day.

Michelle Paschal Did you start or stop vitamin D?

Greta Fernandes Pereira Did you notice that the hives we’re better after you started vitamin D?

Sharon Spahn Lalkas I’m 64, started 2 1/2 years ago. I was sitting at work and said to my coworker, “is my lip swelling, it feels it!”. That was the beginning. Took a year before they were a constant part of my life and I have had ups and downs mentally. Joined this group a month ago and it’s been a life saver! I’ve had my fifth Xolair shot today and I’m hoping #5 is my lucky number. Nothing worked for me except Prednisone and I was on it for four months and had to go off of it. So I’ve suffered too long, but again, this site has helped tremendously. I hope your journey is short and itch free

Janna Lindsey Started 24/25 yrs ago while playing​ in the snow. It really didn’t affect my everyday life until about 4 yrs ago after the death of my mother. Had 2 yrs of pure misery…then it stopped. Crazy

Molly Murphy Started when i was 10 and lasted 15 years. Basically had them all the time, mostly on my arms and legs but sometimes they were all over. Aveeno eczema baby cream helps with itching. They only went away when I was diagnosed with alopecia. Then they came back for a few weeks while I was pregnant but Benadryl helped with those

Mary Del Prete Thomas Mine started at 12,, had it about a year then stopped. Reappeared after I had my son at 34, lasted about 6 months, back again after trying depoprovera at 38, about 6 months….back again at 45 about a yr. Back again at 52 (now) into 9th month, on Xolair..

Kerrie Armitage I’m 30 now mine started at 24 after I had an anaphylactic reaction to exercising, I’m immunosuppressed to control it. My daughter started at 4, we never figured out why, she’s nearly 13 now and managed a couple of years without them, she’s just been prescribed fexofenadine since over the counter are no longer working

Misti Holland I was 29, now 55. I have had this all of this time, never in remission. Sometimes they are bad, sometimes they are tiny and appear and disappear within hours. I take atarax daily, when they are bad, I add about 4-5 other meds.
I honestly have no clue what was doing 28 years ago. I have lived with them so long now they are just part of my life.

Tammy Brown First reaction was when I was 5 years old and I sat where my mom’s heating pad was. I am 36 now. When I was younger I took antihistamines only during the middle of summer or winter, but have to take them year round now. I take Allegra 180mg in the morning and Zyrtec 10mg and Ranitidine 150mg at night. I occasionally get some hives with the antihistamines, but they take care of the itching for the most part.

Franca St. Cyr Gravel I was 41 when they started. Next month will be 2 yrs.
They appeared around my right eye one day while I came off an evening shift at work. It took 1 year for them to calm down. March will be a year since I have had them under control. Not remission. I have had maybe two week breaks a few times at most without meds.
Hydroxyzine and Cetirizine every other day has been what now works to keep the hives at bay.

Melissa Saxby Last September at 38 years old. Not in remission, yet, but controlled with Blexten daily.
I was told the 2nd generation antihistamines have less side effects and risk than Benadryl – you might consider trying the newer antihistimines (Reaction, Claritin, etc.) to see if they help you more than Benadryl. What seems to work well for some doesn’t for others.
It started with a small patch of hives on my chest and then over the course of a few weeks spread all over. I would sometimes get the bruising hives that hurt a lot, and swelling to my face. Much worse at night or if I overheated.
I hope you find relief soon, and I also hope to look as young as you at 48 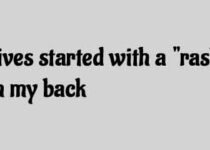 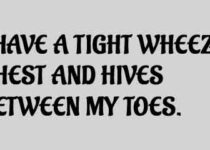