My first reaction of hives was as a young child due to sulfa drugs. Fast forward to college- I had them again- Nutella and a Zpac were the correlations. Fast forward 5 years and last September had a reaction right before what I believe was a flare. All of this previously has responded to Benadryl and a dose of steroids and not come back. I am on day 3 of this, I’ve had a 60 mg dose and 3 50 mg dose of steroids as well as a Kenalog shot. Benadryl seems to knock them down some but as soon as it wears off they are back. I can’t live on Benadryl and no one seems to be taking this seriously. Worst part: I’m in a gal between where Cobra insurance takes over so I’m private paying for everything to get essentially the run around. Anyone around the Fort Hood or Austin Area have luck with any doctors? The last photo is a progression of four 30 minute periods. The first period being when I got the steroid shot. I’m at the rheumatologist now and they seem to want to pass me to Derm and Allergy. Derm and Allergy wanted me to come to Rheum. Oh the frustrations.

Tracey Hawker I am so sorry you need xolair

Amber Shawnee Who prescribes this an allergist ?

Tracey Hawker For me it was an allergist but it was life changing.

DiLisa Donald Stoop I wish you were in Baton Rouge because I have a great Allergist. I was shuffled around a lot at the beginning also. But the Allergist helped me more than anyone.

Amber Shawnee Hey if I have to travel I will! Lol

Margaret Crider I’m so sorry, this looks so painful. Have you tried taking any supplements with any success?

Amber Shawnee I’m not sure what you mean. Like vitamins?

Margaret Crider Yes. There have been small clinical trials on the effects of certain vitamins and minerals that have been effective at treating CU. It isn’t a guarantee that it will work as everyone is different but sometimes its worth exploring the alternative route when traditional medicine fails.

Laurie Beall Toth Take some Zyrtec right now. Take 2 a day along with the Benedryl. At least to get through this flare. I think Prednisone started making my hives worse.

Amber Shawnee just left the rheum- he said with steroids in my system there’s not much they can do to test because it will impact test results. I’m fading off of the steroids since they aren’t working anyways. Glenda Ray ive discusses this with allergist before because we definitely previously thought this. He didn’t think I had that but the appearance of these hives are different than normal and since they aren’t responding to the typical it might be that. I’m positive my dad has it and why not check the one test that can tell you!!

Glenda Ray I was thinking more along the line of recurrance. One of the reasons I was diagnosed (in addition to the tests) was because I had unwittingly documented my MCAS in my daily diaries over the last 50 years.

Amber Shawnee WOW!!! I was doing that but it was a lot to keep up with how did yoj document t

Glenda Ray I have kept a daily diary since I was 13. By referring back to my diaries we figured out that I developed MCAS when I was 14 and developed rheumatic fever from an undiagnosed episode of strept throat and then was treated with a broad spectrum anti-biotic that is seldom used on humans now. I developed anaphylaxsis and hives and gi issues that lasted for almost a year after treatment stopped
and I went into remission. Several times over the last 50 years I came out of remission and had hives, developed adult onset asthma, joint pain and CFS. Ibwas just keeping a diary, but it turned out that it answered a lot of questions.

Ina Wood I would take myself all the medicines your taking right now. Sometimes are bodies build up some type of reaction to them.. weird but for me so TRUE.. Start taking the Zyrtec and Ranitidine combo. You can get both over the counter..
Morning and night.. Also drink a ton of water and try eliminating some high histamine foods..
Be prepared for steroid rebound for a few days which will make your hives worse before they start easing off

Amber Shawnee Thank you! Yes my allergist had me off pretty much all meds because of this and he said he couldn’t rule out stuff on such a regiment. Since the rheum said none of this is helping I’m going to back off everything to my doxepin and start there and see what happens. I can take the doxepin since it’s the weekend and I can sleep anyways!

Elizabeth Murillo See if they will add ranitidine. A lot of people need that combo. It really helped me a lot. Didn’t “cure” me. But eased the hives.
I see a dermatologist. I’ve seen every dr under the sun, including rheumatology. When I saw rheumatology they asked why the other drs sent me there. Stick with either allergy or dermatology. Sorry you’re in such agony. Sending positive vibes.

Ben Hynes I currently receive Xolair at Allergy & Asthma Center in Waco as well as taking 10mg of Zyrtec and 10mg of Montelukast each night. However, the doctor I had an initial consult with was not the doctor who prescribed the Xolair for me but rather was a formality as I go to school down here and had to switch where I get my shots.

Amber Shawnee Thanks I will check into that

Poupoune France I am sorry! I feel your pain. My allergist really helped me but he is in Houston. I have been hives free for 2 years now.

Tana Myers My first hives came on with sulfa drugs as a child again at 25, and now 33 for no apparent reason. I’m on the prednisone too I hope they don’t return as I taper off. This is the second round of steroids for this episode

Johnathan Elmore Allergist. Keep trying them out till you find a good one that has a confident diagnosis and treatment plan. If this 3 day episode lasts longer than 6 weeks you likely have some kind of autoimmune that can be treated with Xolair. I took a dozen Benadryl a day to stay out of the hospital. If you are able to, park in the ER parking lot and take Benadryl every 20 minutes until symptoms start to subside.

Janet Brown I groan just thinking about a flare like that. My magic duo is 180 mg Allegra + Pepcid when they start (2 x day, each) and if the flare continues, I add 50 mg Atarax 3 x day to help deal with the discomfort until it calms – usually 3 to 4 days per flare. Oh, and bags and bags of loose frozen peas.

Pam Hutchins Find yourself a good allergist/immunologist and start talking Xolair. It’s the only thing that worked for me. There is a pinned post at the top of this page that has a map link where people have put in doctors they use. Check to see if one is near you. Best of luck!

Evelyn Brethour When will you have insurance again? I am sorry I was confused about that part of your intro. The good thing for most of us is that many medications to treat symptoms for hives are relatively cheap (predisone, over the counter antihistamines, and even immunosuppressants). Most testing relative to chronic hives, can probably be put off (in my very unprofessional opinion), until you are back on insurance. Before ObamaCare, I was deemed “uninsurable” by the market, so I am totally sympathetic to where you find yourself. Every time I think about pre-existing conditions becoming part of our lives again, I get sick (grrrr).

Stephany Boyles I feel for you girl! Benadryl has never helped me at all. Zantac and the offbrand of claritin are about the only combination that does anything for me. Best of luck! 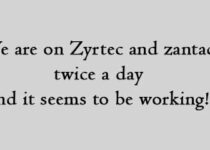