Hives are so weird.

Hives are so weird. I had to get an endoscopy today for an unrelated issue. Took a shower this morning (which usually begins the hives cycle) – no hives. Was a nervous wreck – no hives. Had the procedure had problems with anesthesia – no hives. Hubby drove me to get something to eat. Had soup grilled cheese with tomato and bacon and a few fries. At the end of the meal could fell the itching starting and noticed when I went to bathroom. – HIVES!! Why???

Michelle Gallione
Sonia Silvia When my dog died in February, I had no hives bc I didn’t eat for two days I was so sad. I expected them bc of emotional distress, but didn’t have a single one! As soon as I ate- HIVES! Leads me to believe in the gastrointestinal relationship to this disease. I’m on Doxipin nightly and stay hive free 😊. My dr says it’s not one particular food, bc we get them all day everyday no matter what. But on a fast, it’s clear there’s no hives, so I think it’s whatever is happening as our bodies process the food.

Meredith League Pretzie
Michelle Gallione even if you are not food sensitive, those two particular things are extremely high in histamines, just something to consider

Sonia Silvia
My allergist/immunologist rested me for everything under the sun and didn’t tell me to eliminate anything. That’s why I never thought of it.

Erin McCurdy
Sonia Silvia my allergist didn’t. My functional MD did. Diet made such a huge diff for me!!! Try an elimination diet! It can’t hurt and might help!

Sonia Silvia
Erin McCurdy did a functional md accept your insurance? I’ve never heard of this type of doctor.

Erin McCurdy
Sonia Silvia no. I had to pay out of pocket. It wasn’t cheap. I’m hive free and antihistamine free after 2 years tho!! Haven’t taken a xyxal in a month. Took some time. Might have been a mold exposure.

Sharon Pearson
Tomato for me too

Elise Rappoport
The bacon! Cold, old cured – bacon is a histamine bomb. I can’t touch any cured meat. Plus the cheese and tomato are high hist too.

Michelle Manovich
Leaky gut, those 3 things gluten, tomato’s and cheese are bad for your microbiom balance if it’s teetering on the fence…

Sonia Silvia
I love tomatoes in any form. This stinks!!

Michelle Gallione
Sonia Silvia It really does! I love aged cheeses and charcuterie and wine and potatoes and all the things AIP says are bad.

Erin McCurdy
Did you fast for the procedure?

Erin McCurdy
Dairy was a huge trigger for me. Tested non allergic and not even food sensitivity but got angioedema all the time from a dairy cheat.

Sonia Silvia
Erin McCurdy yes I had to fast from midnight the night before.

Erin McCurdy
Sonia Silvia wonder if that’s why. I know we are all diff I feel like I had a lot of food triggers. Allergy blood work was neg and food sensitivities were not exciting but changing my diet made such a huge diff

Sonia Silvia
Erin McCurdy I will have to look into this for sure.

Cassandra Pandolfi
You would have fasted for the endoscopy right?

Cassandra Pandolfi
Ooops, just read the above. So yeah. I agree that certain food even if there is no “allergy” are triggers for people like us 😢

Evelyn Brethour
Why, why, why?!!! It is so hard, maybe even impossible, to stop looking for what you just did, for the reason. Every doctor I have thinks my issues are acquired DNA defects (damaged genes). 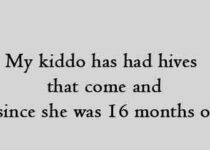