I noticed that my hives look like mostly lines. They appear and disappear then reappear at different locations over my body, Starting from head to legs, sometimes the whole body at once, heated and itchy. Worst at night, about every day. I notice that many of you have different forms of hives. Wonder if “lines” mean anything? Been like this for two years now. #sleeplessnight #itchinessinbed #whattodo #Zyrteceveryday #histamines

Angela Scott I get them like this too. I used to think it was pressure but not sure now x

Mel Ham Cane from clothing due to pressure. I get them on my ankles from my socks.

Edna VanPyrite Yep, pressure. I get them at my waistline and under my bra. The other day I got two under the pad that holds my specs on my nose. Doesn’t take a lot of pressure obviously.

Joanne Bayliss Me too, it’s pressure

Edna VanPyrite Yep, pressure. I get them at my waistline and under my bra. The other day I got two under the pad that holds my specs on my nose. Doesn’t take a lot of pressure obviously.

Laney Pollard Cobb I read somewhere a few months ago, that bodies produce more histamines at night. I thought that was interesting and makes sense as to why we have them worse at night. Ugh

Contessa Creevy Interesting I read something that said that the body stops producing its own natural antihistamine at night and that was why they are worse at night. 🤔 I wonder how it really works

Contessa Creevy Lol no. I was just thinking “oh no I better do more research if there are conflicting theories”

Stephanie Benware I get lines too but it’s almost always caused by something. It’s how my hives appear. Doc called them dermetographia hives caused by urticaria.

Jenny Stevenson Zumba It doesn’t matter what I am doing, my hives appear randomly. My face, my belly, my legs, my back, etc etcâ€¦ and then they also move around. It’s crazy. It has its mind of its own! I don’t get it. I don’t scratch. It’s annoying! Again always lines like scratches without me touching.

Michelle Davis I ha e the exact same. Putting clothes on or taking the off is enough to cause the lines to appear. I have had this for 10+ years. It’s been relatively managed with Atarax and Reactine. But having some really bad flare ups lately. Starting to do some research on Mast cells and DAO. Anyone have success with supplements recommended to help this?

Jenny Stevenson Zumba Yes that’s me but I am in Year two 😕 I am sorry you are on this much longer. This sucks

Jenny Stevenson Zumba Lisa Ann I really don’t know. I just woke up with hives one day. I break into hives everyday, more at night though. Sometimes it gets worst of what I eat. I am seeing a holistic dr. It’s been a week. Still no changes. He said if I stick to his program. I can be cured by a year. Wishful thinking

Josh van Es They’re called demagraphia. They’re not hives per se, but they’re definitely related in that its a mast cell-mediated histamine response in the skin. Usually much more fleeting than hives, as you describe.

Sue Elshire Hargrave I’d like to see research about this type of rash! Will you share the info from Pub Med, please? I’ve never heard of this before! Very interesting looks much like bruising, and hives can do that too! Tell me more!

JohnsCindi Fagan I have a friend with a young adult daughter who was found to have this. It is treatable with high dose long term antibiotics. The illness has many other symptoms though, fatigue, pain but the marks are a telltale sign .worth investigating. 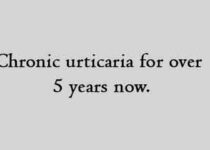