Had my first Xolair injection on Thursday and here I am this morning. The worst I’ve been for a while. Has anyone else had this after Xolair? I was, of course, hoping for a miracle so this is very depressing.

Michaela Nevelius I looked like that after my first injection to 😓 after the second it got a little bit better and now after my third I still get hives but it’s not as bad as it usually is in the summer. I normally look like that every day in the summer so it’s a big improvement for me

Katie Kuster Xolair can take a couple months to work

Charley Charvat Xolair can take anywhere from the first shot to the 4th shot to work. Don’t lose hope yet.

Samantha Jane Looks so itchy and sore. Feel sorry for you

Tania Hughes Ouch! My legs look very similar when they are bad. Have you tried ciclosporine? That worked for me ? Fingers crossed the Xolair kicks in soon though? I know in America some have had more frequent injections and that works?? Not that it will happen on NHS.

Kim Spencer At least we don’t have to pay for it on the NHS! My doctor told me to stop taking the rest of my meds which I haven’t after a discussion on here, but I think I really ought to so I can have an honest conversation with him next month.

Bob Clifford My wife sue has urticaria like that when she is bad. She takes up to 3x 180g telfast doses per day as per consultant instructions and uses eumovate steroid cream twice a day plus cetraben emollient afterwards.

Stephanie Bradshaw I had it way worse after the 1st injection sent me to hospital. Didn’t dare go for a second – now managed with cyclosporine and hives. Hope u feel better soon

Shahla Samreen I.usedto had a worse. reaction after xolair

Cochinillo Dulce I checked Xolair’s side effects. Itching and rash are one of them. WTF.
And that is me on that picture.
Sorry to see someone go through that; yet that is so me at any given point.

Nina Kiteley It took 5 months for it to start working for my daughter but now it’s changes her whole life. Hope it does the same for you, just have patience x

Kim Seaward Don’t give it, it took four shots for me Hang in there sweetie

Rhoda Young I feel for you. The Xolair prob made me worse( hard to say, as skin was bad anyway) & every month when I returned for my next, I prayed it would help. I’ve had my 6th (in the UK so that’s my whack) & don’t go back to see Dermatologist until end of Aug. My skin hasn’t got as bad as yours(you poor soul) but really don’t think the Xolair helped me. I’m still taking a cocktail of antihistamines with Xolair.
I hope you start to improve.

Terri Binga Unfortunately Xolair can do that in the beginning. Just stay the course I promise it does get better. My son who is (12) has been on it 21 months. It has given him a life back. I will say from our experience that if your fighting ANY type of a virus when you get your Xolair injections you can also flare up pretty bad. Speaking from many experiences with that from my son.

Laurie O’Broin I found it got worse for the first few days after each injection and then started getting better than before i had the injection. So second month i had a flare for a couple of days but not as bad as first month and then symptoms reducrd again to better than first month result and so on.

Toodie Ray Xolair worked wonderfully for me for months, then it stopped. I’m going to try one more time and then I don’t know what. It’s very discouraging. I do know that for some people it takes several rounds for it to take affect. Sending you positive juju that it starts to work for you.

Lori Giancola Did you try 2x monthly? Also backing it up with zyrtec & benedryl every night?

Ellen Carroll Kim, it took 5 shots for me to get relief . . I also had prednisone for a bit. So sorry for you. Xolair affects people differently. Hope you get relief. Have you tried ice . . it is short term but it has helped me.

Bev St Vincent Hello I live in Canada and I suffer from this my doctor had me do up to 15 IVIG treatments did not help then I had Plasmapheresis is a process in which the liquid in the blood, or plasma, is separated from the cells. In sick people, plasma can contain antibodies that attack the immune system. A machine removes the affected plasma and replaces it with good plasma, or a plasma substitute. That was in 2008 and I haven’t had any major out breaks I am sharing to let others know.

Lori Giancola Oh wow! Thats awesome. How often do you get the tx? My friend with MS gets those tx every 6mo.

Cochinillo Dulce I wonder if that is covered by insurance here in the US. 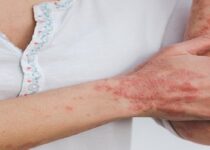