Dr prescribed Hydroxyzine HCL and The ER had given me Hydroxyzine Pamoate. Been using the Pam when needed now the Dr said to use it nightly. Took the HCL and woke with hives. Is anything going to work!!? Has anyone took either of these and which worked better?

JORDAN ELSE The active ingredient is the same, there isn’t much of a difference between the two. If that isn’t working for you, other antihistamines might.

LISA BENARD CHRISTENSEN The only thing that works for me is benedryl. A few other daytime types worked for a while then stopped working but luckily benedryl does the trick. I sometimes have to get up at 3am for another dose though.

LIZ KING I take Hydroxyzine 25mg, 2-3 times a day. I hate taking this much medication but I’m able to return to work

KATIE WESTMARK-BENJAMIN Cut out refined sugars , breads and coffee… You might feel a difference.

LIZ KING I haven’t drunk coffee in months, soda in years, bread is one thing I’m still working on but I’ve had tons of testing that conclude it’s autoimmune but I’ve had a number of inaccurate diagnoses so still experiment as I learn and am able 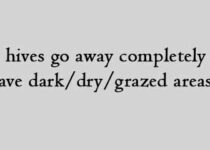